Whoopie! I’d like to start this post by saying–before you get confused–that the title of this post refers to the somewhat odd timing of this recipe. As it happens, Spring arrived for just a fraction of a second this weekend. Well, it actually stayed a while. I’m not sure if this is just San Francisco playing games with us, but I’m prepared for more rain in the future. But this weekend, oh you were glorious. And despite the fact that Fall is long gone, I couldn’t bear the thought of holding onto this recipe until next Fall. So I’d like to tell you about pumpkin whoopie pies. And with this recipe, hopefully bid adieu to the dreary, chilly, rainy days as well. Perhaps you have a can of pumpkin puree sitting in your cupboard somewhere? I know I do. I stocked up so that I could make pumpkin butter whenever I want. The inspiration for these whoopie pies came a few weekends ago. It was my friend Jeff’s birthday. Knowing that I sort of have a reputation to uphold at parties where food is served, I knew I had to come up with something good. You see, for Thanksgiving this year, I made pumpkin brownies. I made sure to make everyone try one. And I also ate like three. Pumpkin seemed to be a big hit, so I thought, who says you can only eat pumpkin in the Fall?

My pie don’t lie. These little babies are delicious! The pumpkin cookies themselves are quite cake-y and spice-y. With the cream cheese filling, they taste very much like inverted cupcakes–but less messy and so much cuter. Straight out of the fridge, they’re slightly denser, and the filling slightly harder. Once they’ve sat out for a bit, they’re more on the mushy side (but don’t get me wrong–mushy in the very best ways). I prefer them chilled. I should also say that you can’t just have one. Perhaps that’s why the guys who wrote the Baked cookbook suggest using an ice cream scoop to make them. I still think I’d rather bake them a bit smaller–they’re so much more charming and still very rich (only us serious sweet tooths can handle multiple servings). In any case, I’ve been familiarizing myself with the Baked cookbook ever since my friend Lindsey got it for us for our wedding (this girl and I are food-mates! She’s inspired many a recipe on this blog). I’ve said it before and I’ll say it again: cooking, ultimately, is a very personal thing. And it’s great when it can be a friend thing. So, got any birthdays coming up? Engagements? Anniversaries? Bring a batch of these and your friends will be happy campers. 1. Start by making the cookies: preheat your oven to 350 degrees F and line a baking sheet with a Silpat or parchment paper.
2. In a large bowl, combine the flour, baking soda, baking powder, salt, and spices. Whisk to incorporate the spices.
3. In the bowl of a stand mixer, combine the brown sugar and oil and whisk together. Add the chilled pumpkin puree and whisk again to incorporate. Beat in the eggs and vanilla extract.
4. Add the dry mixture in batches, whisking to combine after each addition.
5. Use a cookie scoop to drop rounded tablespoons of dough onto your prepared baking sheet, about an inch apart. Put the leftover dough into the fridge until you’re ready to make the next batch. Bake for 8-12 minutes (you can also use a small ice cream scoop to make bigger whoopie pies, but I prefer the more manageable versions–trust, they’re plenty big!). The cookies are done once a toothpick inserted into the center comes out clean and the cookies are puffed and look set. Remove from the oven and let cool. Remove the leftover dough from the refrigerator and prepare the next batch. Remove the cookies from the oven and let cool.
6. Make the cream cheese filling: sift the sugar into a bowl and set aside. In the bowl of a stand mixer (using a paddle attachment), beat the butter until it is smooth and creamy. Beat in the cream cheese until completely combined, and no lumps are visible. Beat in the sugar and vanilla until smooth and combined.
7. Once your cookies are cooled, assemble the whoopie pies: Drop about a tablespoon of cream cheese filling on the flat side of one cookie. Top with a second cookie (flat side down), and press together gently to seal and spread the filling to the edges.
8. Place the whoopie pies on a parchment paper-lined baking sheet and store in the refrigerator. Let the cookies firm up in the fridge before serving. 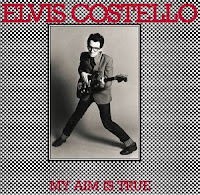 Dear readers, welcome to the working week. I know it don’t thrill you, and I hope it don’t kill you. Kasey and I would love to brighten your Monday a little if we could. And with that in mind, I’d like to say that I saved one of Kasey’s whoopie pies for you – but I didn’t. In fact, I pretty much ate them all by myself. We shared a few with some friends, but I definitely ate more than my share. Sorry about that. All I can say is that they were damn good. You’d have liked them. But don’t get all angry and cynical, you’ll just have to make some for yourself. You can score the recipe over at eating/sf. And speaking of getting all angry and cynical, that brings me to today’s Musical Pairing: Elvis Costello‘s debut album My Aim Is True. Costello’s debut album blends elements of pub rock, the seething anger and cynicism of punk rock, and his own clever, witty and intelligent lyrics together to create a stunning, upbeat masterpiece. Without any shadow of a doubt, having inspired countless other artists, Elvis Costello’s My Aim Is True is one of the greatest and most important rock records of all time. Head over to Musical Pairings to read more. –Matthew