Those of you who have been longtime readers of eating/sf may have noticed that restaurant reviews have been few and far between these days. Recipes have always been the bread and butter of this blog, but restaurant reviews were a regular occurrence on Fridays (along with Local Pairings in lieu of our usual Musical Pairings). Thing is, over the last few months, I’ve been less and less excited about writing restaurant reviews. I still love eating out, and sharing my experiences, but writing about them just doesn’t seem as fulfilling anymore. So what does this mean for eating/sf? Well, I’ll still post reviews of cool places that I eat at, but it won’t be on a regular basis. I hope you’re not too disappointed in me. Ultimately, this blog makes me happy. So happy. And it makes me want to share a myriad of recipes with you–many of which have been sitting on my computer and are yet to be blogged about. I’m certainly not killing off the reviews portion of this blog, but wanted to explain myself, and to let you know that the food that I cook at home will be the predominant focus from here on out. Sound good? Awesome. Thanks for listening.

Now let’s chat about some of my recent hobbies: baking bread, photography and…homemade yogurt. I have been diligently buying tubs of Clover and Straus Family Creamery yogurt for years now. At $5/tub, I was starting to wonder: how hard is it to make my own? The answer, it turned out, was actually: not that hard at all. You can certainly make yogurt at home without a yogurt maker, but keeping it at a steady temperature for several hours becomes somewhat tricky. So I invested. And like all good investments, this one paid back.

I’ve now successfully made five batches of homemade yogurt, using a little ceramic jar of Saint Benoit as my initial starter. This is the only plain yogurt that Matt will eat–he introduced me to it when we first met, and has been devouring it every morning for breakfast. Saint Benoit is a local (Sonoma-based) yogurt producer. Their yogurts (I’d highly recommend trying them, even if you’re not going to attempt making your own) are made with high-quality organic milk, contain live cultures (which promote a healthy digestive system), and just taste delicious. For my homemade yogurt, I of course wanted to create the most high-quality product possible. For less than $3/quart, Straus Family Creamery organic cream-top milk is a great base. Every glass bottle is topped with a healthy chunk of cream that floats to the top. For my first batch, I used whole milk, but have since switched things up with 2%. If you’re worried about the extra fat, just scoop off the layer of cream that accumulates at the top of your yogurt.

Homemade yogurt is not only extremely delicious, it’s healthy and it’s cheap! Think of it this way: I spend about $2.79 a week to purchase the best quality milk I can get my hands on. Scoop in my starter (the Saint Benoit yogurt). The batch makes 6 individual-sized jars of yogurt. I set one aside for my next batch (it serves as the new starter). A whole week’s worth of yogurt! I plan on replacing my starter every 5-6 batches or so–the cultures get weak–and it also gives me an opportunity to try new kinds of yogurt!

Eat yogurt for breakfast with homemade granola and fruit, with honey, use as a dressing, marinade, or make it into dessert (look out for some fun ideas in the near future). 1. Pour the milk into a medium saucepan. Place a thermometer inside (clip it to the side of the pot). Heat over medium heat until the temperature reaches 170 degrees F–just before it starts to boil.
2. Remove the pot from the heat, and place it in the refrigerator on top of a trivet for approximately 15- 20 minutes. Allow the milk to drop down to 110 degrees F (placing it into the fridge will cool it quicker, but not evenly, so be sure to stir the milk and test it before using).
3. Once the milk has cooled, stir in the yogurt. Don’t whisk, but make sure that it is well-incorporated.
4. Pour the mixture into the jars that come with your yogurt maker and close them tightly. Place the jars inside the yogurt maker. Turn on the yogurt maker and let sit for about 6-9 hours. The longer you let the yogurt sit in the heated yogurt maker, the thicker it will get.
5. Remove the jars from the yogurt maker and store in the refrigerator for up to one week. Be sure to set aside one jar to use as your next starter. 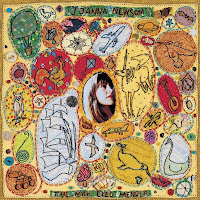 Smooth, slightly tart, and simple but still impressively flavorful. That is how I’d describe the homemade yogurt Kasey has been preparing for us recently and featured over on eating/sf today. And there is something about yogurt, and especially this particular homemade yogurt, that feels somewhat rustic to me. Like it is the type of food you’d enjoy with a little honey on an imaginary idyllic farm in Sonoma County or the South of France. And for this reason, Joanna Newsom‘s debut album The Milk-Eyed Mender seems like an appropriate pairing for this recipe. On this album, her impressive and unique vocal delivery is relatively raw (relative to her more recent releases that is), but can be described as smooth and slightly tart. It is an album that just sounds charmingly homemade, rustic and beautiful. Read more at Musical Pairings @ eating/sf. –Matthew