I am what one would call ‘a bag lady.’ That’s right. I carry 2-3 bags to work every day: my work bag, my gym bag and sometimes my lunch bag–when it does not fit into my gym bag. That goes to show that I’ve been a big city girl for some time now. I’ve gotten used to lugging my things around town, including to happy hour, when they oft don’t fit in the small spaces and crevices between the chairs. So you’re probably not surprised that I am no Southern cooking connoisseur. But I’m willing to learn. Shrimp and grits is a good a start as any, don’t you think?

There’s good reason that when you Google ‘Shrimp and Grits’ the first recipe that comes up is Bobby Flay’s. He the master of the Throwdown. He does not always win, but he always puts up a good fight. I’ll admit it, I wasn’t sure how I felt about making shrimp and grits Bobby Flay-style. It’s likely that’s he’s thrown down with some poor woman in Alabama at some point and potentially crushed her hopes and dreams of ever having her own Food Network Show.

Alas, I thought I’d give it a try. It seemed easy and as comforting as comfort food gets. This stuff is rich. Super reach. Cheesy, creamy, smoky. Rich. Did I mention it’s rich? I mean, we’re frying shrimp in bacon fat and stirring in a cupful of cheddar cheese and nearly 2 tablespoons of butter into polenta..errr…grits. All made to split between two people. But you know what? Health-nut as I can be, I just gotta say this stuff is good. GOOD. Next time I might even spice it up a bit–with some hot smoked paprika, maybe some red pepper flakes.

Bobby Flay, I’m lookin’ at you! 1. Start out by making your grits. Bring water to a boil in a medium pot. Add salt and pepper. Pour in the polenta/grits. Lower the heat to medium. Stir and cook until water is absorbed, about 20 to 25 minutes.Cover the pot if it’s bubbling too much.
2. Remove the pot from the heat and stir in the butter and cheese until incorporated.
3, Rinse the shrimp and pat dry. Set aside.
4. Fry the bacon in a large skillet until browned. Remove the bacon from the skillet using a slotted spoon and transfer to a plate covered with paper towels. Don’t pour out the grease.
5. Add the shrimp to the grease in the skillet and cook until the shrimp turn pink. Next, add the lemon juice, chopped bacon, parsley, scallions and garlic, sauteing for a few minutes.
6. To serve, spoon grits into bowls and top with shrimp mixture. Adjust seasonings, to taste. 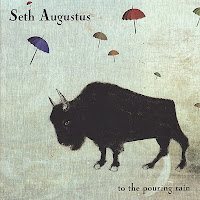 Shrimp and cheesy grits. This is one of those dishes that holds a very specific geographic connotation for me. The first time I ever tried a dish similar to the one Kasey prepared and is featuring on eating/sf today, I was in Louisiana. And as a result, I can’t help but to associate this dish with Louisiana, the South, and Cajun cuisine. This is despite the fact that my San Francisco-based foodie wife’s version of the recipe actually surpassed the version I tried in New Orleans. Anyways, with that in mind, I think today’s pairing makes perfect sense. Seth Augustus is a San Francisco-based musician and on his debut album, To The Pouring Rain, his guttural, throaty vocals are accented by skeletal, spooky atmospheric backing instrumentation steeped in heavy doses of voodoo and ghostly blues. Indeed, this is an album that is stitched together in such a way that is sounds like it would make the perfect soundtrack to skulking around in dark, foreboding alleyways in the heart of New Orleans or stomping around in menacing, alligator-filled Louisiana swamps. Head to Musical Pairings to read the rest of the review. –Matthew