Vanilla Bean Ice Cream: If You Love Somebody - Turntable Kitchen
Log In or Register
0 Items

Vanilla Bean Ice Cream: If You Love Somebody If you’ve never had homemade vanilla bean ice cream before, I must inform you: you have not lived. Ok, maybe you’ve lived little–but not to the potential that you COULD be living. I’ve had a few disasters in the kitchen: marshmallows-check. Pumpkin ice cream- check. Brown rice -check–and hey, don’t judge!

That pumpkin ice cream kept me away from my ice cream maker for a while. But, after a few very successful batches, I started exploring more with ice cream recipes. I even made Pinkberry-style frozen yogurt. But the clincher? Well, this vanilla bean ice cream, which quite frankly is the best vanilla ice cream I have ever tasted. I was a little hesitant about making such a proclamation about a recipe from an instruction booklet for an appliance, but it’s true. It’s true! I’m usually much more of a chocolate fan, but my curiosity led me to whole vanilla beans–and their possibilities. The first time I made this ice cream was, naturally, this summer. Not that it really makes a difference when you live in San Francisco: parka in the summer, parka in the winter. It was, in a word, incredible. Nothing like any old vanilla ice cream. Flecked with real vanilla bean seeds, this custard-based ice cream hardly got any freezer burn–even after several days in the coldest part of my freezer.

The texture of the ice cream was very much reminiscent of custard–silky, smooth, and infused with the most intoxicating vanilla fragrance. I hadn’t specifically waited to make it again, but a celebratory dessert idea led to it. Initially, I had envisioned this ice cream being only an accent to a stellar focal point (I’ll tell you about it next week…hint, hint.). But when it came out of the ice cream maker, still so creamy and melty to the touch, well, it seemed that it had stolen the show. We certainly enjoyed the complete dish, but this ice cream made an even stronger impression on me. I apologize for not sharing it with you sooner. And despite it being winter and all, I urge you to make a batch, and maybe drizzle it with some smoky, hot chocolate sauce. 1. Combine the milk and cream in a medium pot. Cut the vanilla bean in half and scrape the tiny seeds into the mixture. Place the pod itself in the pot as well.
2. Bring the mixture to a slow boil over medium heat, and stir to distribute the seeds.
3. Once the mixture comes to a slow boil, reduce the heat and simmer for about 30 minutes, stirring every once in a while. Remove from heat, but keep the burner on low.
4. In a medium bowl, combine the egg yolks, eggs and sugar. Whisk using a hand blender on medium speed for about 1-2 minutes (or until the mixture is pale yellow and smooth).
5. Use a spoon to remove the vanilla bean pod from the cream/milk and pour out about 1 cup of it into a measuring cup.
6. With the mixer at low speed, beat in one cup of the reserved hot mixture into the egg mixture in a slow and steady stream.
7. Once combined, pour the egg-cream mixture back into the pot and return to the warm burner, stirring until the mixture coats the back of a spoon.
8. Pour the custard into a bowl, cover with a sheet of plastic wrap (place it directly over the custard) and refrigerate until completely chilled.
9. Once the custard is completely chilled, make the ice cream according to your ice cream maker’s instructions (I have a Cuisinart, as you can guess) 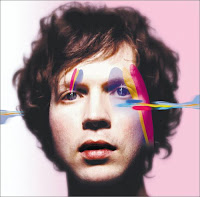 The word vanilla is sometimes used to refer to something in its simplest form, to suggest something is bland, and/or something is without frills or kink. But there is nothing bland or simple about the vanilla bean ice cream recipe Kasey is sharing over on eating/sf today. Indeed, the use of quality ingredients such as pure vanilla bean means that this focused recipe offers clean, pure flavor that will leave you cleaning the last bits of ice cream out of the bowl. Similarly, in the realm of Beck’s discography, there can be no question that Sea Change would be Beck’s “vanilla” record. Sure there are flourishes of string arrangements, light keyboards, pedal steel, and the occasional twirping/revving electronic noise presumably brought by producer Nigel Godrich (who produced all of Radiohead’s best records), but the real focus of Sea Change is Beck’s songwriting, voice and frequently an acoustic guitar. And by keeping it simple and focusing on straight-forward song-writing and instrumentation, Beck recorded one of his most critically-acclaimed records to date (his best alongside Odelay anyways). Continue to Musical Pairings‘ home. –Matthew

Mussels and Chorizo in Polenta Broth