Roasted Rhubarb with Cardamom and Vanilla: For Baba Alla - Turntable Kitchen
Log In or Register
0 Items

Roasted Rhubarb with Cardamom and Vanilla: For Baba Alla 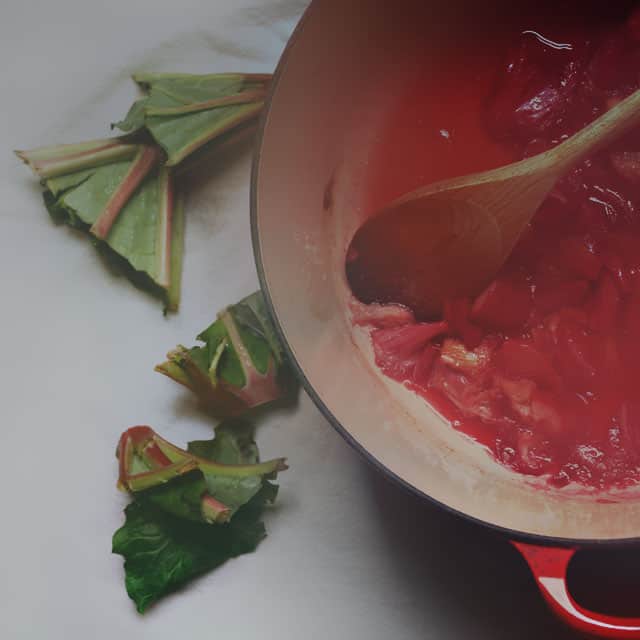 My grandmother had a major sweet tooth. It was not uncommon for her to have a little ‘dessert’ immediately following a pastry breakfast. When I would come over as a little girl, she always had something sweet for me to nibble on. She could make a plateful of thin, buttery crepes like nobody’s business. She’d prepare batches ahead of time just for me. We ate them with plenty of butter and sugar.

She was the sort of woman who spent her whole life despising cats, only to fall in love with one towards the end of it. She was a worrier who once told a cable car conductor while visiting San Francisco that he must stop the car so that a man who lost his shoe could pick it up to avoid getting sick.

My memories of (and with) my grandmother are sort of fragmented as the time we spent together has been fragmented. When I was very young, I spent a lot of time with her, watching news programs at her apartment with her, watching her cook, and taking walks through parks and visiting museums in Moscow. She was extremely social, having lady friends, hosting dinner parties, New Years parties and birthday celebrations. When we moved to Israel, she came to visit for a long stretch of time. When we moved to New Jersey, my grandparents tried to come as often as they could. But by the time we moved out to California, I went off to college and her health began to decline, I saw her quite infrequently. Before she passed away, nearly two months ago, she was weak and hardly the same person that I remember.

So often, I’d want to pick up the phone and call her in those last months but the fear of speaking to a stranger terrified me. I didn’t want to remember her that way. So I didn’t call. And when she quietly passed in the suburbs of Moscow, I was lost in trying to figure out how I should act or feel. I was sad, of course, but I also wanted, so badly, to capture in writing who she was. But nothing was coming out. For a few weeks, I felt like I was uninspired to write anything. I wanted to cook, but I didn’t have anything profound to say. I was going through somewhat of a challenging time already and my family’s loss made me feel helpless in a way, especially being so far away. 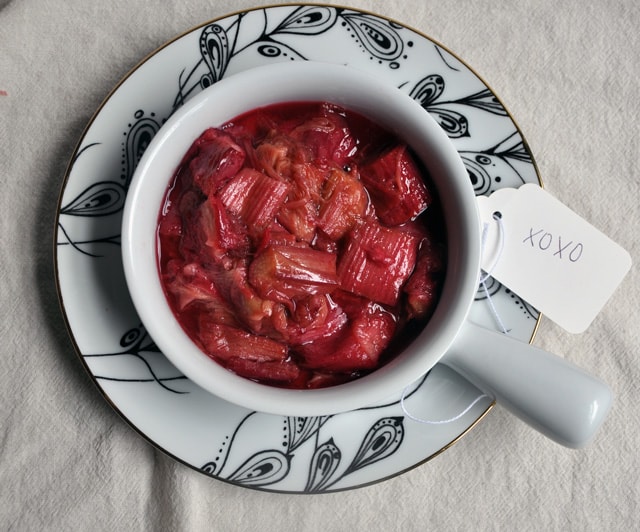 I thought about what I could write. How I could start a post about a woman who lived the love story that had inspired me my entire life. Who has traveled the world. Who had a successful career before raising her daughters. Who kept a home that I always wanted to be in, always wanted to explore. Who had the tenderest touch and whose voice could lull me to sleep like a baby, even when I wasn’t one. Who loved sweets and never apologized for it. I realized that all of those individual memories don’t have to tie into a single story. They don’t need to have a continuity. And the rhyme or reason behind why we remember something about a person but not another, doesn’t need to be explained.

When I think of my grandmother, I think of a woman who knew how to love and despite all of her worrying, lived in love. It’s no wonder she loved sweets, and so do I.

Roasted Rhubarb with Cardamom and Vanilla

The aroma from this compote of sorts is intoxicating – a hint of cardamom, warmth of vanilla and of course, the bubblegum pink tartness of rhubarb. I like to eat this all on its own, by the spoonful, but you can also pour it over merengue, yogurt, ricotta or your morning oatmeal.

1. Slice the rhubarb into 2 inch chunks and place them in a large, heavy bottomed, oven-proof baking dish. Add the cardamom, vanilla extract, sugar, and about a 1/4 cup of water. Toss gently and roast in the oven for about 30 minutes (until the rhubarb is tender and breaking apart and the juices are gooey). Add more water during the roasting process if the rhubarb looks dry – the juices will be delicious. 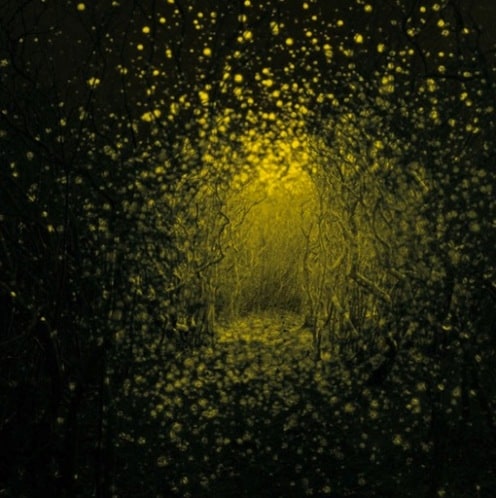 You can read more about today’s Pairing, listen to and download tracks on the Turntable side of things.