B’stilla. Now that’s a word you’ve probably never heard before (perhaps I’m being presumptuous). Until a few years ago, it certainly wasn’t a dish I was familiar with. But I’ve quickly learned to love it, and finally, finally attempted to make it at home. To be clear, this is not the traditional Moroccan dish made with squab and layers of phyllo dough. However, the concept is similar: the filling made with (in this case) chicken is loaded with a bevy of warming spices, fresh herbs and dotted with plump, golden raisins.

Upon first seeing b’stilla on a restaurant menu, I couldn’t get over the strange combination of chicken, cinnamon, powdered sugar, phyllo and saffron. But you know what? It’s absolutely out of this world. The layers of buttery, almond-crunchy phyllo encase the most flavorful filling, which is slightly sweet, but in no way overpowering. My only complaint with this recipe–and perhaps next time I’ll cook down the filling a bit more–was that the bottom layer of phyllo was rather mushy (not flaky like the top layer). Despite this very, very minor imperfection, this b’stilla could certainly hold a candle to many of the best I’ve eaten.

I’ve been thinking about it a lot since we made it last week. In fact, I’ve been thinking about having some friends over and making it again. Served with a beautiful salad, and a glass of Zin. For those of you who are used to seeing fresh posts on Monday mornings, apologies for the delay. Matt and I were at Lake Tahoe for the weekend, enjoying the incredibly fresh snow and gorgeous weather, for which we seem to both be paying the price now. But two full days of skiing, burgers and garlic fries on the mountain, beers in the hot tub surrounded by snow, great conversation, charades with friends, and a road trip with a friend who just became a better friend can’t really be traded.

For those of you who are fans of eating/sf on Facebook, you might recall that we asked you a few weeks ago how you felt about videos. Some of you thought it would be cool if we made some more. So we did. Check out www.facebook.com/eatingsf and get a little taste of what it’s like to be in our kitchen. Matt makes an appearance, and you’ll get a special Musical Pairing to complement time in the kitchen. By the way, if you’re looking to impress someone, with Valentine’s Day just around the corner, this just may be the recipe for you.

For the phyllo layers:
1/2 cup of almonds
3 tablespoons of powdered sugar
1/2 teaspoon of kosher salt
1/4 teaspoon of ground cinnamon
10 sheets (about 17×12 inches) of defrosted phyllo
1/2 cup of butter, melted

1. Make the filling: Heat the olive oil in a large skillet over medium heat. Add the diced onion and sauté until tender (8-10 minutes).
2. Stir in the cinnamon, ginger, saffron, and turmeric. Stir with a wooden spoon to combine well with the onion. Sprinkle in the flour and stir to combine.
3. Pour in the chicken broth and bring to a simmer. Meanwhile, sprinkle the chicken with salt, and gently place into the broth.
4. Reduce the heat slightly, and cook the chicken uncovered for about 20 minutes (reduce heat and cook down the liquid until it’s pretty thick). Use a pair of tongs to flip it occasionally to make sure it cooks evenly.
5. Stir in the raisins once the chicken is cooked and set the skillet aside, allowing the chicken to cool down.
6. Transfer the chicken to a plate and use your fingers to coarsely shred it. Place the shredded chicken back into the skillet. Stir in the chopped cilantro and parsley, season with salt and pepper. Give it a nice stir and let cool.
7. Now, use a small processor to finely grind the almonds, powdered sugar, salt and cinnamon.
8. Stack the phyllo sheets on a cutting board. Flip a 9 inch glass pie dish onto the stack and cut around the edges, making rounds. Re-freeze the leftover phyllo.
9. Place a sheet of plastic wrap and a damp kitchen towel over the rounds. Brush the pie dish with butter.
10. Line the pie dish with one thin phyllo sheet. Brush with butter and sprinkle with about a tablespoon of the ground almond mixture.
11. Top with a second sheet of phyllo and repeat with the butter and ground almond mixture.
12. Do this 3 more times.
13. Spoon the filling into the phyllo-lined pie dish. Place one sheet of phyllo on a cutting board, brush with butter, sprinkle with almond mixture and top with another sheet of phyllo. Repeat with the remaining phyllo sheets, but do not butter and sprinkle the last sheet.
14. Transfer the phyllo stack atop the filling and gently tuck in the edges. Brush with the remaining butter and cut 4 small slits at the center making an X.
15. Place the dish on a baking sheet and into the oven. Bake for about 40 minutes (rotate once, if needed) to allow the phyllo to get a nice golden brown color and the filling to heat through.
16. Allow to cool for about 10-15 minutes before cutting into wedges. Sprinkle with some cinnamon and powdered sugar before serving. 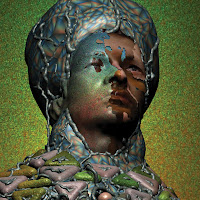 B’stilla is a traditional Moroccan dish often served as a first course for celebratory meals. With that in mind, I wanted something that felt both exotic and upbeat to pair with the recipe posted on eating/sf. Yeasayer’s forthcoming album, Odd Blood ,was that perfect pairing. If you haven’t familiarized yourself with Yeasayer yet, they are a Brooklyn-based band that has previously described themselves as “Middle Eastern-psych-snap-gospel.” And honestly, I had planned to wait to post a review of the album until closer to its official release on February 9th, but this just felt to natural. The album is celebratory, upbeat and to call it merely “exotic” doesn’t do it justice. Odd Blood is a beautiful, lovingly textured, freak-pop, danceable-psych celebration of life. Odd Blood is their sophomore effort. Its relatively sharp left-turn from their previous full length, and it is already one of my two favorite albums of the year (alongside Spoon’s Transference). More at Musical Pairings. –Matthew