Rum-Spiked dulce de leche. Need I say more? I don’t, but I will. Because I gotta. I have been itching to tell you about this delectable sweet since since I made it late last week. You see, it was inspired by a treat that we smuggled back from Maipu, Argentina–a little jar of homemade hazelnut dulce de leche.

It sat in our fridge for about a month before we finally felt ready to break into it (the Malbecs are still unopened–we just can’t bear to part with them just yet!). After the first spoonful, we were hooked. Unfortunately, that jar didn’t last long, and soon I was trying to figure out how I’d make my own homemade hazelnut dulce de leche. I made dulce de leche once before, for a batch of alfajores. But I needed something more. A complexity of flavor. I had yet to find a bottle of hazelnut extract which, you’ll be pleased to know, I just purchased this weekend!

In the meantime, I did a lot of research before I came across what seemed to be like a feasible stand-in. I realized that it wasn’t hazelnut, but the rum and vanilla accents seemed like they could really elevate the plain dulce de leche (which, trust, is similarly addictive). While nutella has always been my ‘spread’ of choice, dulce de leche is really moving up the ranks.

I tweaked the recipe for rum dulce de leche, which was published in Gourmet back in 1999. I used 1 can of sweetened condensed milk, 1 tablespoon of rum and a 1/4 teaspoon of vanilla. And I added a few pinches of chunky gray sea salt. In a word: sublime. I have to admit that I really didn’t think that this would live up to the stuff we brought back from that little artisan shop, but it actually came pretty darn close. One of my favorite things, surprisingly, was the addition of the salt. An unexpected salty crunch in the midst of a velvety, sugary lick is perhaps what contributed to the substantial consumption of the batch over the course of the weekend. The rum is unexpectedly subtle, but still adds a touch of finesse while the vanilla is also not necessarily distinguishable, but is every bit as necessary. Next time you’re sitting around your house, throw a can of condensed milk in your oven and let the heat do the magic. I’m planning on trying my hand with that hazelnut extract. Ohh, and by way of a little preview of what’s to come: try slathering this on a slice of homemade bread. There is no better way to finish a meal.

2. Pour the condensed milk into a 9-inch round pie dish, sprinkle with a pinch or two of sea salt and cover tightly with foil.

3. Place it into a larger roasting pan/casserole dish and fill the roasting dish with hot water so that it reaches halfway up the side of the pie dish.

4. Bake for about 1.5 hours, until thick and a nice, rich golden color.

5. Carefully remove the dish from the oven and place the pie plate on a trivet. Let cool slightly before adding in the rum and vanilla, whisking until smooth.

6. Transfer the dulce de leche to a clean glass jar; sprinkle some gray sea salt on top and stir to combine. Add more gray sea salt, to taste. Store in the refrigerator and eat atop bread, English muffins, scones, crepes, and simply straight from the jar with a glass of wine or a cup of coffee. 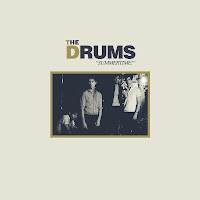 The Drums‘ are the Brooklyn-based indie-pop quartet that are responsible for producing some of the best and most infectiously upbeat, pop songs to grace the Internet in the past few months. Their debut EP, Summertime!, is the perfect pairing for the fantastically flavorful rum-spiked dulce de leche featured on eating/sf today. This recipe won’t be denied: just one taste and you’ll find yourself heaping gooey, sweet spoonfuls well past the normal tolerance of your sweet tooth. Likewise, the cuts on the Drums’ Summertime! have the type of melodies that will drill a mainline to the serotonin-producing parts of your brain. You’ll find yourself humming “Saddest Summer,” “Let’s Go Surfing” and “Don’t Be a Jerk, Jonny” in your sleep. For more, head to Musical Pairings @ eating/sf. –Matthew

Caramelized Fennel Fettuccine with a Poached Egg + Eat In