I spotted this recipe for a buttery buckwheat flour cake on 101 Cookbooks a while ago, and suddenly thought to make it for dessert when Matt and I had a couple of friends over for a dinner party. It had appealed to me because of its simplicity (coupled with the fact that I had, in my possession, just the right amount of buckwheat flour left over from some past experiments with pancakes, and a handle of Bacardi from New Year’s 2009).

In all honestly, I thought this cake was a nice little homely end to a cozy meal that started with a cheese spread, followed by some chicken. To my great satisfaction, the cake came together pretty quickly, but it looked…well, kind of like a brown round disk that wasn’t very exciting. The smells that filled my kitchen as I opened the oven were, in a word, divine. A buttery aroma that transported me into a mix of European bakery and island resort (not quite sure which, to this day).

Heidi recommended we top this cake with a little whipped cream, or some yogurt and maple syrup, the latter of which proved to be ample in my fridge. We cut into the cake–dense and crumby. We each scooped a spoonful of yogurt. Poured the syrup atop (some drizzled, some just dumped). I took a bite. And it was all over. My usual “I’ll eat one slice and the rest is for you, Matt” turned into “I need a piece of that cake pronto.” I found myself sneaking pieces after dinner, before breakfast, and post-drinks with friends at midnight. There just wasn’t enough of this cake.

Not to sound terribly cliche (my high school, poetry editor self would be ashamed), but you really can’t judge a book by its cover. So let this humble little brown cake prove you wrong! 1. Butter a 9 inch springform cake pan and preheat the oven to 350 degrees F.

2. Whisk together the flours with 1/2 teaspoon of salt and cinnamon.

3. In a separate bowl or stand mixer, beat the butter until it is light and fluffy, then add the sugar, beating until smooth.

4. In a small bowl, whisk 4 egg yolks + 1 egg with the vanilla extract and rum. Drizzle this mixture into the butter mixture, beating at medium-high speed to combine.

5. Add the dry mixture into the batter, beating at medium-low speed until just combined.

6. Pour the batter into the cake pan, smoothing the top with a silicone spatula.

8. Bake the cake for approximately 35-45 minutes (until a toothpick inserted into the center comes out dry). Keep in mind that this cake is very dense. Let it cool before taking out of the pan, and serve with a dollop of yogurt, and a drizzle of maple syrup. 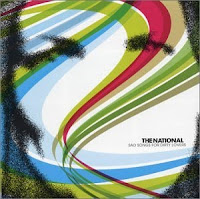 The breton buckwheat cake recipe featured today on eating/sf is a new favorite of ours. Thanks to the buckwheat, it is dense, rustic and has a slight, but noticeable, hint of alcohol courtesy of the rum. More, it’s buttery and aromatic thanks to the cinnamon. The addition of sea salt gives it a nice little tang that makes it quite different from the typical sweet dessert. That is why it is a great dessert for adding toppings (such as maple syrup and/or yogurt or whipped cream). For those reasons, The National’s sophomore album, Sad Songs For Dirty Lovers, is the ideal pairing for this recipe. And it is also an ideal pairing since this buckwheat cake is one of my new favorite desserts and Sad Songs is one of my favorite albums. Head back to Musical Pairings to read the rest. –Matthew