I don’t know about you, but when my alarm clock rings at 6:30 a.m. on Monday morning, I usually start thinking about breakfast. It’s not like I was underfed as a child (in fact, more often than not, I refused the food that was offered to me). I just really like breakfast. It probably helps that I am always hungry in the morning. Really, regardless of the time. On the weekends, my stomach starts appealing to me at 8, and on the weekdays, it can barely survive through the shower.

I’m generally one for routines, but every once in a while, a good change is nice. So in the spirit of Thanksgiving and Fall, I decided to spice things up in the morning with a little pumpkin butter. I kept hearing about how amazing it was from a Trader Joe’s jar, but taking to the Internets, I was convinced that it was simple to make at home, and probably a. healthier and b. tastier.

What’s pretty amazing about pumpkin butter is that it sort of tricks you into thinking that you’re eating something really rich and indulgent, when really, what you’re eating is largely pumpkin, some apple juice, a little sugar and spices. Stirred into yogurt with a little granola, it’s a heavenly start to any manic Monday. I made a batch of granola to go along with it, using a recipe from my site, though I added some pepitas, sunflower seeds and currents into the mix. I’ve yet to try my hand at canning, so in the meantime, I simply halved the recipe, ensuring that it would be all but consumed in a week’s time which is about how long it lasts in a sealed container in the fridge. A word of warning–you might just find yourself illuminated by the fridge light with a spoon in your hand late in the night. This is stuff is addicting!

While this may not be the side dish you bring to a Thanksgiving potluck, it might be the little treat you bring to share with the host (along with a baggie of some of homemade granola to sweeten the deal). Pumpkin Butter
Adapted from Smitten Kitchen and All Recipes

1. Combine all of the ingredients, save the lemon juice in a medium saucepan, and bring to a boil.

2. Reduce the heat to a simmer, stirring the mixture every once in a while until it become creamy and thickened (the consistency of a jam, almost). This takes about 25-30 minutes. Squeeze in lemon juice, and add any additional spices, to taste.

3. Transfer to a Tupperware with a tight-fitting lid, and refrigerate for up to a week. (You can also can the pumpkin butter, using a standard canning technique). Serve with yogurt and granola, atop bread and crackers, and stirred into oatmeal, as you wish. 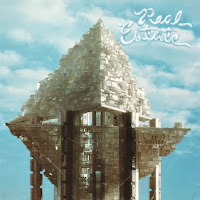 They’ve been receiving a lot of hype, but for good reason: Ridgewood, New Jersey’s Real Estate are definitely the next lo-fi pop sensations. The band consists of singer/guitarist Martin Courtney, guitarist Matt Mondanile, drummer Etienne Duguay, and bass player Alex Bleeker. Members of the group have all been playing together in various configurations since they were in middle school in the Jersey ‘burbs, so this is a band that has had plenty of time growing comfortable playing with one another over the years. As a result, their self-titled debut is an album that sounds like it was probably recorded over a number of lazy summer days in the quiet and solitude of the suburbs by a band that is comfortable with one another just has chemistry. Indeed, Real Estate’s eponymous debut is a shimmery, lush pop album that hums along like a happy day-dream. For this reason, it is an ideal pairing for Kasey’s fantastic pumpkin butter recipe, which I can highly recommend enjoying on toast with a cup of coffee/tea on any lazy morning/afternoon. To read more about this album, head over to Musical Pairings‘ home. –Matthew

Pumpkin Tea Cake: I Knew This Would Happen