Did you miss me? I sure hope so! Because it was quite painful to see that my last post was on May 23rd. This is quite possibly the longest stretch I’ve had between posts and I hope that you understand and stay with me people, stay with me. It’s been a whirlwind. I had a lovely, lovely birthday. I celebrated with my family at a restaurant called Baker and Banker (if you go, do get the trout appetizer–it is FANTASTIC) and then whisked myself and Matt away to Kauai. I’ve received some requests for a roundup guide, so will do my best to share one with you in the next few weeks here. What a beautiful place! I can’t wait to share some photos with you. I’m red as a lobster, but it was well worth it. The older I get, the more I tend to think that it’s inappropriate to stretch my birthday celebration out, but this year I’ve decided that birthday week would make its glorious return. And so, I’m celebrating again. I’m hosting a brunch for some friends and I’m going to bake all of my favorite things. You can’t have too many excuses, right?

Now, on to the recipe. Baked eggs. It’s a wonder just how much you can do with an egg and I’m learning that there really is no limit. Lately, I’ve become addicted to eggs. I love them in my pasta. On bread. And baked in little ramekins. Don’t they look pretty? The original inspiration for this recipe, which I’ve made on a number of occasions, was this New York Times recipe which was adapted from a dish at Oakland’s Camino restaurant (GREAT place). A number of blogs across the country and the world gobbled it up: The Wednesday Chef, Sassy Radish, Seven Spoons. I’ve been sticking to the tried and true until a batch of freshly-made sourdough breadcrumbs sat looking at me longingly from my kitchen counter, and an upcoming trip to Hawaii begged me to use some Hawaiian red sea salts in a recipe. I mean, what was I to do but make a new, jazzed up version of baked eggs in cream?

This take lightens things up a bit by using milk instead of cream (though you could certainly substitute cream) and gets a lovely crunch from the baked breadcrumbs, which I drizzle with some high-quality flavored olive oil. The leeks are the centerpiece of the whole dish, in my opinion. Buttery, sweet, delicate and tenderly nestled below the egg. It’s a wonder I only made one. If you’re so inclined, maybe a batch of these for a light brunch or lunch with friends. Have plenty of bread on hand. And with summer all around us, how about a side of Sangria? One of my favorite Bay Area bloggers, Local Lemons, has a recipe for Sangria with Strawberries and Kiwi. 1. Preheat your oven to 400 degrees F, with the oven rack set in the middle.
2. Heat the butter in a small pan then add in the leeks, a tablespoon of water and a pinch of salt. Cook leeks for a few minutes, until tender.
3. Add the herbs and toss briefly to combine.
4. Transfer the sauteed leeks to a buttered ramekin (leftover leeks are delicious eaten on their own or tossed into a salad).
5. Crack the egg over the leeks and pour in the milk or cream. Sprinkle with salt and pepper. Cook for about 3-4 minutes, then toss breadcrumbs on top and drizzle with a bit of olive oil (I used basil-garlic olive oil). Cook for about 4-8 minutes (until the white is set and the breadcrumbs are lightly golden and crisp).
6. To serve, sprinkle with a bit of Hawaiian red sea salt (it’s super earthy and mild) and drizzle with more oil, to taste. 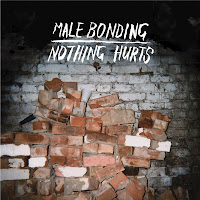 I can tell you that this is a great breakfast or lunch recipe to make you feel lively on a weekend morning or a weekday afternoon. And, thus, for today’s pairing I’ve selected the album that has been my go-to album when the coffee alone isn’t working and I’m in need of a little morning pick-me-up: Male Bonding‘s debut Nothing Hurts. It’s a slab of raw lo-fi that alternates between fuzzy, hypnotic punk and noisy, thrashing pop. Read more at Musical Pairings. –Matthew