You see, when you purchase a package of whole vanilla bean pods, you often get 2, and if you’re going to use one vanilla bean pod, you might as well splurge and use two. Naturally, the first was sacrificed for the vanilla bean ice cream. The second, I used to make a batch of pear compote. Compotes for me are often associated with summer, and grandparents. Not sure what it is about the grandparents part. My grandfather will often make compotes–from the overflow of apples and apricots that grow in my parents’ backyard. We’re lucky here in California–my parents’ home is a mini orchard: orange tree, apple tree, lemon bush, apricot tree, and pomelo bush (which, curiously, were identified as ‘weird grapefruits that don’t taste good’ until only recently). We’re not lucky enough to have pears, but thankfully, they’re plenty available at this time of year.

This Vanilla Bean Pear Compote, which is very slightly adapted from Thomas Keller’s Ad Hoc at Home, was the finishing touch to our New Year’s Eve dinner (almost the entire menu was conceived from it). Our compote, though, was not only delicious by itself (the pears nearly fell apart as you forked them and retained a ton of vanilla flavor from the seeds that infused the ‘broth’), but also led to the creation of an incredible sundae. Remember the ice cream? I also managed to whip up some chocolate sauce (from David Lebovitz). It was really the kicker. The compote certainly didn’t last for a month as Thomas assured. Ours was devoured in the form of sundaes–and was excellent accompaniment to oatmeal for breakfast. Go my friends, go. Run to the grocery store and poach thee some pears!

1. In a large pot, combine the wine, sugar and cloves.
2. Split the vanilla bean in half and scrape the seeds into the mixture. Add in the pod itself.
3. Bring to a boil over medium heat, stirring until the sugar dissolves, then add the pear slices.
4. Add enough water to cover the pears, and dial the heat down a notch. Cook for about 15-20 minutes, until the pears are translucent and can easily be pierced with a fork.
5. Remove the pears from the mixture using a slotted spoon and place into a large container with a tight seal.

6. Bring the liquid to a boil and cook until it is reduced to about 1/2 cup (it should be the consistency of a syrup). Pour the syrup over the pears and place the vanilla bean pod into the container. Throw away the cloves. Refrigerate for up to one month.

To make your sundae, spoon 5-6 pear slices into a bowl. Top with two scoops of homemade vanilla bean ice cream, and a drizzle of homemade chocolate sauce. I used this recipe from David Lebovitz’s blog and like him, proceeded to eat it straight out of the container by the spoonful for the next couple of days. 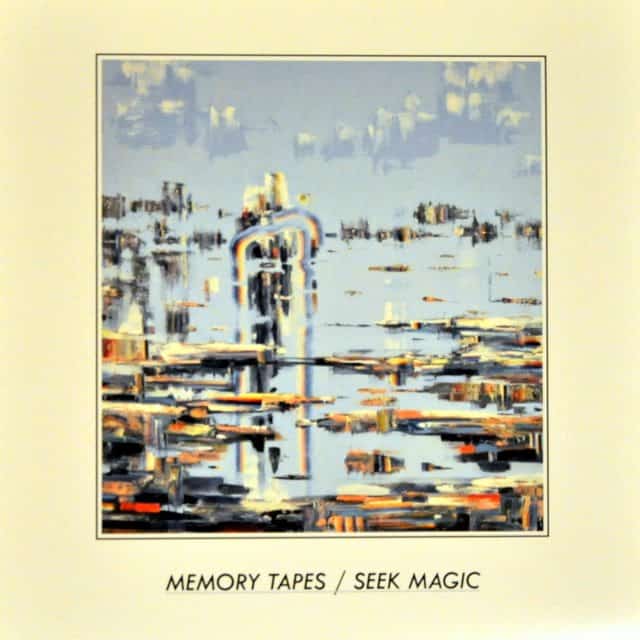 I’ve come to realize that I’m a big fan of recipes for that call for poaching pears.  After all, poaching pears has the benefit of adding to the fruit’s natural sweetness and flavor by adding wine, vanilla and other spices to create a more complex and aromatic dish.  When Kasey prepared this vanilla bean pear compote, we tried the pears on their own (and they were fantastic!), but also really loved topping the compote with vanilla-bean ice cream and some homemade chocolate sauce.  The result was a seriously decadent and delicious dish that will make you feel good on a cold winter night!  And if you are looking to feel good and beat the cold and dreariness on a winter night, you’ll want an upbeat but cozy Musical Pairing to accompany this recipe, and I recommend Memory Tapes’ Seek Magic to be that record. Head over to Musical Pairings‘ home for the rest of the review. –Matthew