A Spring Awakening in A Chicken Soup 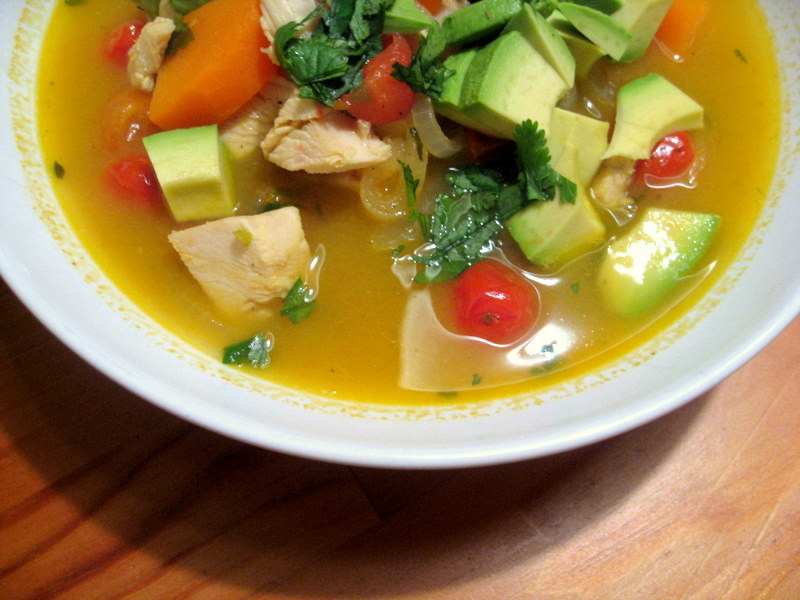 San Francisco is finally, finally seeing some warmer weather. We haven’t had the worst of winters, but I’m always happy to bid adieu to rains and chilly temperatures (even if they’ll come back every once in a while). Spring to me is an awakening. A lengthening of the days that extends into late evening glasses of wine, and more open toed shoes, calling for more pedicures.

I’m a May baby, so naturally, Spring is my favorite time of the year. It’s that little sneak peek at summer. It’s like a first bite of the season’s first strawberry. You know what you’re in for for the rest of the summer.

My strawberries are seemingly still being imported from Mexico, but we’re close. So close. As the warmer weather starts rolling in, the meals we make will inevitably start becoming lighter. During one of the last chillier weeks, though, I indulged in a Mexican-inspired soup that will just about close out your winter.

I took my inspiration from this simple soup from The Kitchn. The original recipe called for fried tortilla strips, which I omitted. I also ended up using a yam instead of a sweet potato (whoops!). Being a big fan of sharp cheddar, I shredded a heavy hand of it over the whole thing. In general, you could really use any ingredients you have on hand –regular potatoes, canned tomatoes, etc. I had earlier in week made some roasted chicken breasts on the bone, so the leftovers were perfect for this soup.

1 regular or sweet potato, peeled and chopped into cubes
1 tablespoon of butter
1 tablespoon of olive oil
1/2 an yellow onion, diced
4 cloves of garlic, minced
1/4 teaspoon of ground cumin
salt and pepper, to taste
1 32 ounce container of chicken broth
3/4 cup of chicken strips, cut off the bone
1 cup of cherry or grape tomatoes sliced in half (or regular or canned tomatoes)
1/2 lime, squeezed
about 1/3 cup of chopped cilantro
cheddar cheese, grated to taste
about 1/4 of an avocado, cubed

1. Bring 6 cups of water to a boil in a small pot and add the potato pieces. Lower heat to simmer and cook, covered, for about 10 minutes, until the potatoes are soft.

2. In a big pot, heat the butter and the olive oil. Add in the diced onion, and cook it until it’s soft, but not browned. Add the minced garlic, salt and pepper, and cumin. Stir around and cook for another minute or two.

3. Pour in the chicken stock, add the chicken, squeeze the lime in, add in tomatoes, potatoes and about a 1/3 cup of cilantro. Bring to a boil and then simmer for about 20 minutes.

4. Ladle soup into bowls and sprinkle with cilantro, cheese and avocado. (Might want to add some sour cream, too).

Musical Pairings: Burial and Roasted Chicken Soup
March is the heart of the rainy season here in San Francisco. It can be a depressing time if not dealt with properly. Enjoying a bowl of hot, chicken soup can be one sure fire way to awaken your spirits on a cold, rainy day, and Kasey’s Mexican style chicken soup is a nice tasty alternative to the potentially boring traditional chicken soup. If you are looking for an equally creative musical pairing for your rainy day meal, I can highly recommend Burial’s Untrue. Burial is an anonymous dub-step producer from London who has worked with folks such as Radiohead’s Thom Yorke and Bloc Party. Untrue is his sophomore album–it’s simply breathtaking. Ghostly vocal loops, ambient vinyl crackle, and intimate rolling rhythms blend together to form a sonically rich album that you’ll want to listen to from start to finish on your next rainy day or late night drive.

Thanks to Stereo/Paste you can check out the excellent track Etched Headphones and Burial’s remix of Bloc Party’s Where is Home. -Matthew

The Girl and the Fig Cafe–The Perfect Name