When Nostalgia Hits: the Salmon of My Past - Turntable Kitchen
Log In or Register
0 Items

When Nostalgia Hits: the Salmon of My Past 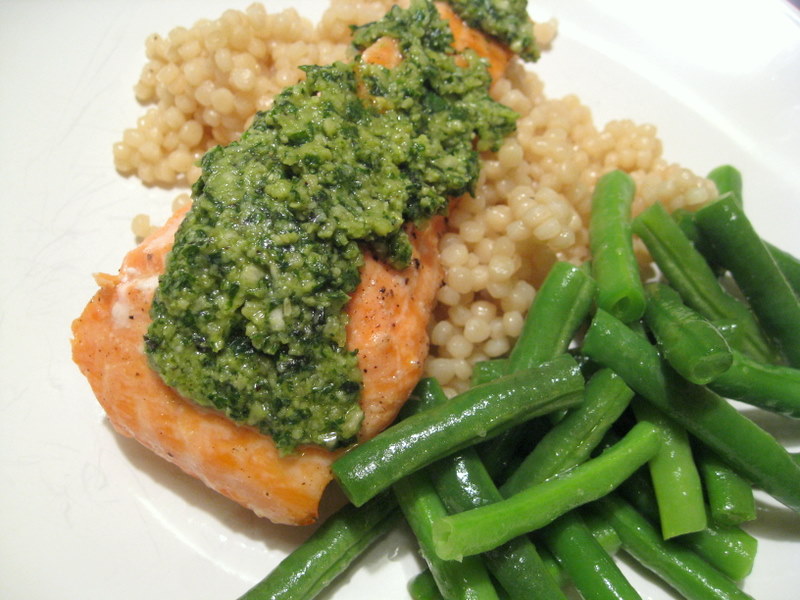 We all have had our favorite dishes ‘of all time.’ Things that we could eat over and over again over the course of one week. Salmon was one of those dishes for me throughout my childhood and early adulthood. My mom would often prepare salmon steaks for dinner, and I’d always order it out at restaurants. The pink fish was a staple of my diet for many, many years. As I made my way towards sushi (it took several years of eating only California rolls), it also became my favorite raw fish. As I started cooking more and more and exploring different kinds of restaurant cuisines, though, salmon started to feel a bit…boring. It seemed like it could only be prepared in so many ways and always tended to pretty much taste exactly the same. At home, I had fallen into a routine of making it with lemon, butter and herbs and wasn’t sure how to change things up. When I’d dine out, I began to order more adventurously: ahi tuna, mahi mahi, barramundi, halibut and even the occasional sardine.

Sometime in the last two years, a friend had me over for dinner and prepared a salmon recipe from Giada De Laurentiis–a salmon fillet served over puff pastry and topped with pesto, tomatoes and toasted almonds. It was flat out delicious–I was blown away by what was done with a simple piece of salmon! Excited, I prepared the dish for Matt, in our early days of dating. We were both very pleased with how simple and delicious it was. A fair amount of time went by and we didn’t make salmon again until I purchased a rather nice wild Scottish piece of fish for us. We baked it rather simply, assuming the fish was so fresh it would taste delicious. And somehow it just..wasn’t. I barely ate half of my fish (out of guilt) and decided that I was in fact over my childhood love of salmon.

Alas, a few weeks ago, while shopping at an organic grocery store in the Castro, I glanced over my options in the fish section and the salmon just looked so pretty. It was calling for me: give it another go! I promise I won’t disappoint. I hesitated at the $14/pound price tag, but figured it was now or never. 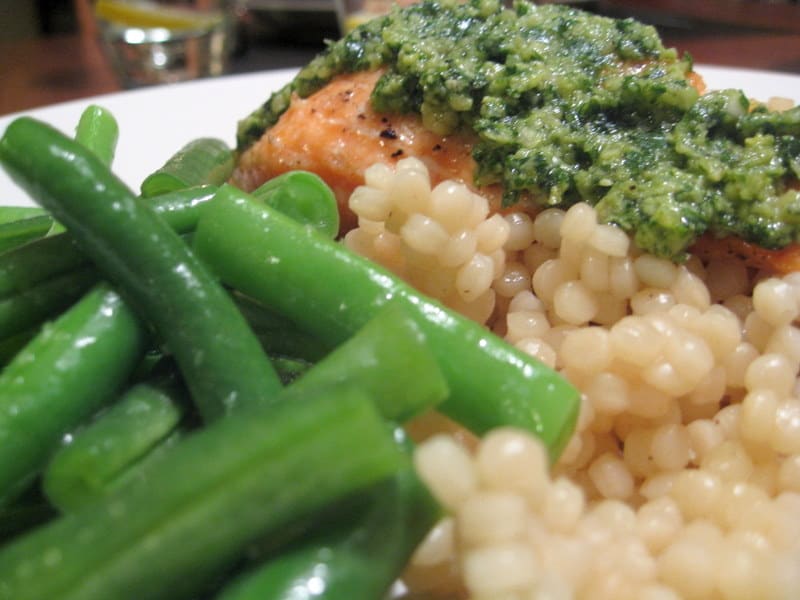 When it came time to making the salmon, I immediately recalled how much I loved the puff pastry dish, so thought I’d put a different little spin on it. I whipped up some fresh pesto in my food processor to start. Do me a favor: never, ever, ever buy pesto in a jar. It’s a travesty. It will be salty, it will be runny, and it will not be anything like pesto is supposed to be. Especially if you have a food processor, there is just no excuse for it. I usually eyeball my pesto: a handful of basil, a few tablespoons of pine nuts, salt, pepper, one crushed clove of garlic, a heavy handed shaving of Parmesan cheese (about 1/3 cup), and olive oil.

The Silver Spoon (a Bible of Italian home cooking) has a fantastic recipe that I’ll share with you. Our adapted recipe ended up being simply this: a nice piece of salmon steak, rubbed down with some olive oil and seasoned with salt and pepper. It was cooked for about 10-15 minutes in a 400 degree oven, and generously slathered with the pesto. We served a side of Israeli couscous, which is quite possibly my favorite non-whole-wheat grain, and some flash boiled green beans tossed with sea salt and olive oil.

I hope that if you’ve neglected salmon as I did, you’ll give this recipe a try and let it redeem itself. Please also enjoy Matt’s latest Musical Pairing.

1. Pre-heat oven to 400 degrees.
2. Rub salmon on both sides with olive oil and salt and pepper to taste.
3. Place the salmon skin side down in a baking dish and cook 10-15 minutes, until the center is cooked through completely.

For the pesto:
* adapted from the The Silver Spoon Cookbook

1. In a food processor, combine basil with the pine nuts, garlic, and a pinch of salt. Start pouring in the olive oil and process until the mixture forms into a puree. Add the grated cheese and process briefly until combined.

Spread the pesto over the salmon and serve.

Musical Pairings: Salmon with Pesto and Animal Collective
The last time Kasey and I prepared a salmon dish, we both felt slightly under-whelmed. For whatever reason, the dish didn’t turn out quite right. As a result, it was probably a good thing that the next time we prepared salmon, we stuck to something safe, something we knew we liked. This salmon and pesto dish is a classic, and Kasey and I have made some variation on this dish on numerous occasions. So, if you aren’t going to challenge your sense of taste with something experimental and new – why not challenge your ears? That’s why I chose to pair Animal Collective’s Merriweather Post Pavillion with this meal. For the uninitiated, Animal Collective sound like an earnest attempt by an extremely musically inclined extraterrestrial to reconstruct the shredded master tapes from the Beach Boys’ Pet Sounds despite a ridiculous lack of insight as to conventional song structures in modern pop music. Disclaimer: although critically acclaimed, Animal Collective isn’t for everyone. -Matthew

A Gem in Truckee-Pianeta, A Review