Artichoke: How Do I Eat This Thing? - Turntable Kitchen
Log In or Register
0 Items

Artichoke: How Do I Eat This Thing? 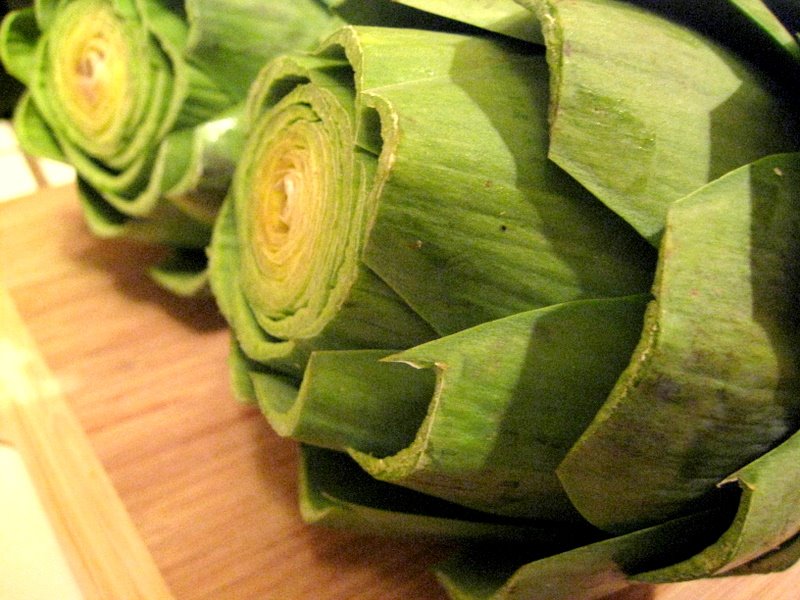 A few weeks ago, I came across some beautiful artichokes at my market and picked up a few to make. Artichokes are the kinds of vegetables that I think only people in California eat–am I wrong? The thing about artichokes is that the first time (and maybe even the second or third) you eat them, you’re not quite sure what you’re supposed to do. It’s kind of like approaching a cactus. In some ways, I think some people avoid eating them because they fear the embarrassment they may face by feeling lost in front of such an intimidating vegetable. The first time I ever had an artichoke, I found it to be pretty bland–and a strange thing to put in my mouth. It had been boiled in plain water and served with mayonnaise. Since that day, I’ve had many opportunities to try this curious vegetable when eating out. My favorite preparation is always grilled, with some sort of garlic lemon butter sauce. I think the biggest artichoke faux pas is definitely under cooking, as it makes the thing sharp and unapproachable.

Elise over at Simply Recipes has a great post about how to cook and eat an artichoke, as both require some expertise. Sam of Becks & Posh also has a great step-by-step pictorial of how to trim an artichoke. I agree with Elise that mayonnaise or butter make great dipping sauces, but I think there is huge potential to spice up the sauce with herbs and spices. People that know artichokes will recognize that the heart (the meaty center part) is the best part of the entire thing, but I think that the leaves deserve some credit, too. It’s fun to peel them and slide your teeth over them to get off as much meat as possible–kind of like cracking and eating sunflower seeds or pistachios, preferably around a big table with friends, and some beer or wine. I also think that it is important to dispel some potential myths: you can eat the meat inside the stem. It kind of depends on the artichoke. The hairy part around the heart? Don’t eat it. Trust me, I have. It’s like putting a prickly child’s toy into your mouth. Not tasty and a potential mouth hazard.

I find it difficult to pair artichokes, so I usually just eat them as a starter/appetizer. The last time we made them this way, we ate them alongside some halibut.

Also, if you’re really intimidated by artichokes, you could ease your way in by buying some marinated, jarred or canned artichoke hearts and cooking ’em up. They can be great with pastas and fish–and of course, dips. Check out Elise’s here. 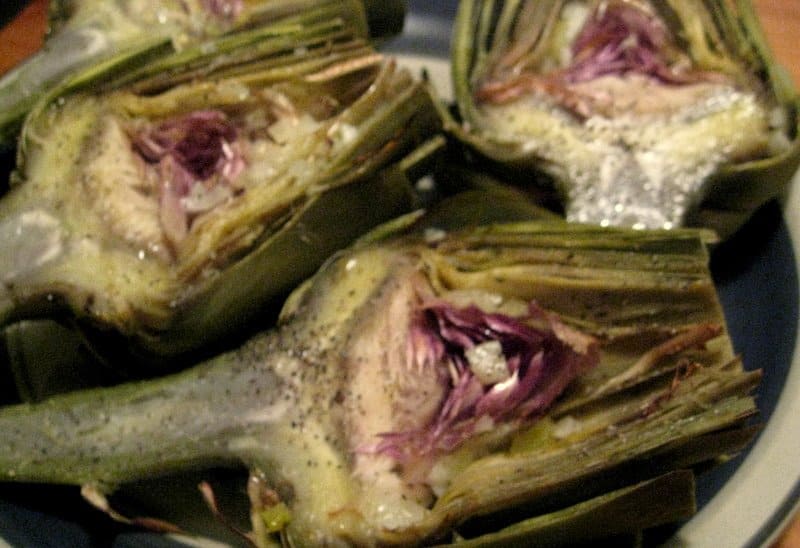 1. After washing the artichokes thoroughly, trim the sharp petal ends all around and cut off the top until it resembles the photo at the top of this post.
2. Fill a large pot with water and bring to a boil. Add bay leaves, 1/2 lemon, garlic cloves (skin removed) and a bit of salt. Place trimmed artichokes inside the boiling water. Lower heat to a simmer and cook for about 30 minutes (until the leaves begin to soften/can be easily pulled off and the vibrant green artichokes become a bit more muted)
3. Meanwhile, preheat the broiler and make the garlic lemon butter: in a microwave-safe bowl, microwave 2-3 tablespoons of butter until it is melted. Mince or crush 1-2 garlic cloves and add to the mix. Squeeze half a lemon and whisk in.
4. When the artichokes have cooked in the water, carefully remove them and place them on a cutting board. Slice them in half, vertically. Brush with the butter mixture and stick underneath the broiler for approximately 3-6 minutes (be sure to keep an eye on them to make sure you don’t burn them).
5. Remove from the broiler and serve with the remaining butter mixture. Feel free to make more for the table, too.

I find that sticking the ‘chokes under the broiler really brings out their flavor, and allows the sauce to seep in a bit. If you have a grill, you can follow the same tactic and throw the whole artichokes on for a few minutes to get a nice smoky flavor.