Most of us have probably taken in more election and campaign coverage over the past year than probably ever before. This election was one of the most watched events in America’s history–and also, one of the most powerful. The candidates turned out unprecedented masses to the polls, new media (including Twitter, Facebook and YouTube) played an incredibly powerful role in communicating the importance of this pivotal election to the youth generation and ultimately, Barack Obama prevailed. It’s fair to say that since I live in San Francisco, I was rarely exposed to anything other than Obama mania. And last night, we all experienced a unified cultural event that will likely live on in our memories for the rest of our lives. We all have our individual memories of the voting process, the coverage, the results and the speeches. But, as a country, we’ll have the collective memory of a previously-unimaginable euphoria over a political figure. America will have its first African-American president. The whole world is watching.

I watched the election results from the comfort of my couch, over some leftovers and tea–and a small pile of work. I prepared, however, with comfort food and let the news fully sink in with another round of it today. Nothing is more comforting than a big bowl of pasta. As long as butter and cheese are involved in some way, I think, you might as well be wrapped in a cashmere blanket. Metaphorically speaking. On Sunday, I put to use a beautiful bunch of red Swiss Chard to make a lovely bowl of pasta. I improvised quite a bit and was pretty sure that there was a huge potential for failure. In the end, though, the chard was flavorful and complemented the pasta perfectly. Here’s how it came together. 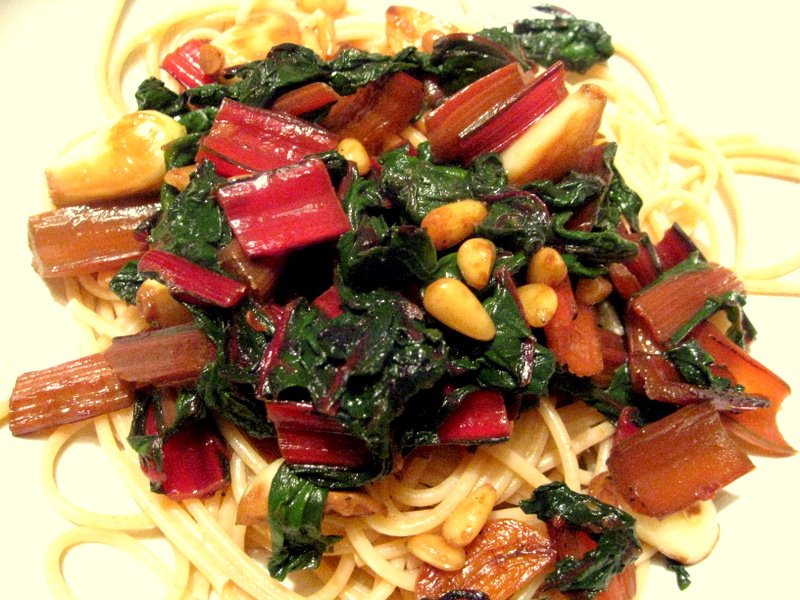 1. Chop the chard and separate the leaves from the stems.
2. Meanwhile, start boiling some water for the pasta. Once it starts to boil, add the pasta and cook for about 10-12 minutes (or until al dente).
3. Add olive oil to skillet (on medium heat). Start sauteing garlic halves. Add the chard stems and saute until the garlic starts to feel less firm and stems start to get softer (5 minutes-ish). Throw in the pine nuts.
4. Add chard leaves and saute until they just start to wilt. Splash in some wine/port, sprinkle with salt and pepper and sprinkle with some red chili flakes. Work in the butter and keep sauteing until the ingredients cook fully (about another 5 minutes).
5. Drain the pasta and top with chard. Shave Parmesan on top and serve with extra Parmesan for the table.

From Conception to Fruition: The Birthday Cake