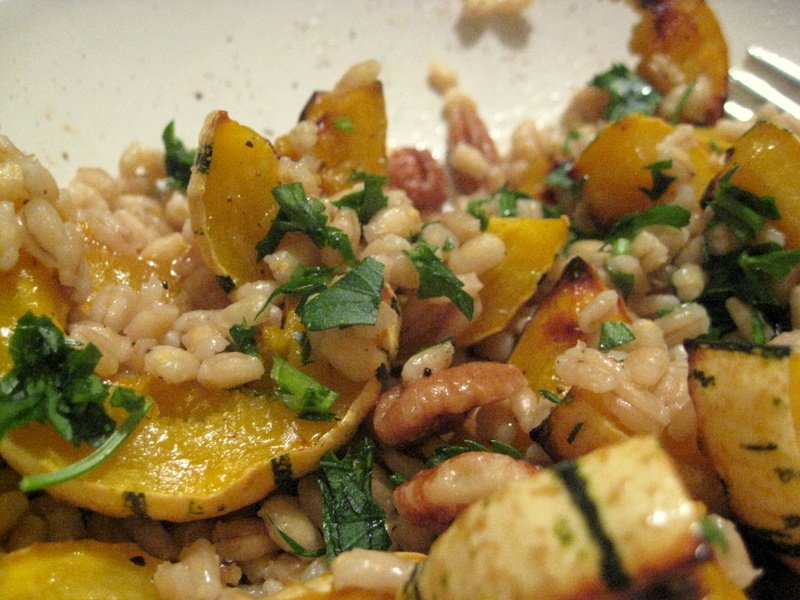 I’ve had two equally delicious experiences with delicata squash: at a co-op in Vermont, which served it roasted in maple syrup from its Whole Foods-like deli counter and at Nopa, where I had it alongside their famous roast chicken. The Nopa dish (which by the way, you must try) was my most recent and solidified my quest for finding this elusive squash in its more natural state. (I like National Geographic speak when referring to hunting out produce.)

Anyway, what makes this squash so good is that you can eat it with the skin on! At first, this feels highly unnatural, but once you take that first bite and realize that it’s soft, slightly crispy and completely melts into the squash , you get past it. Plus, delicata combines the best of all squash worlds–slightly sweet like butternut, nutty like acorn and velvety like pumpkin. Since I tried the maple-roasted squash on my road trip through Vermont this past October, I’ve been trying to recreate it with all sorts of squash, but never to the satisfaction of the original dish. It either comes out too try, too sweet, too mushy, too hard, too flavorless. What was I doing wrong? 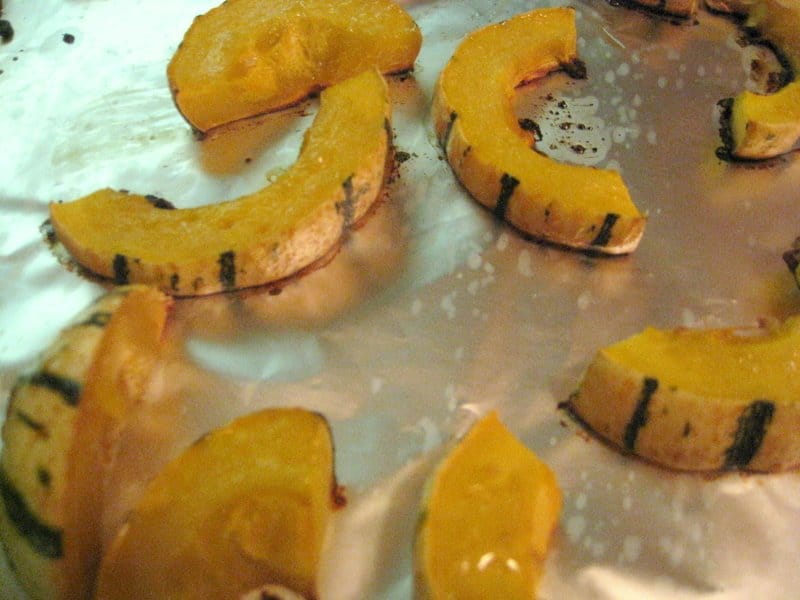 My eyes saw gold this weekend at the Mountain View Farmer’s Market, where I spotted these striped little suckers and picked up three (now, I find out they can be kept out at room temperature for several weeks and I wish I’d gotten more). Anyway, I figured that I would give the real thing a shot and voila–success! The secret, I think, is a mixture of olive oil and maple syrup and a high roasting temperature.

I decided to pair the squash with some early grains and pecans for a vegetarian meal (these usually happen sans-Matt) accompanied by a glass of chilled white wine.

Preheat oven to 375 degrees F.
1. Prepare the squash: cut it lengthwise and then scoop out the seeds/mush inside. Slice into 1 inch wide half moons and line them along a foiled baking sheet.
2. In a ramekin, combine 1 tablespoon of olive oil with 1 tablespoon of maple syrup. Use a silicone brush to spread this mixture over the squash slices. (at the Vermont co-op, the squash was roasted with dried thyme, which you can feel free to add)
3. Place in the oven and roast for about 30 minutes. Feel free to baste occasionally with any remaining mixture.

In the meantime, prepare the barley:
1. Start out with about 1/2 cup of water. Add a bit of salt and a tablespoon of olive oil and bring to a boil. Pour in the barley. Throw in a dash of cinnamon. Stir occasionally and continue to add water whenever it starts to evaporate. This process is similar to making a risotto, except you’re not using rice or broth. You’ll probably add water (by the 1/3 cupful) 3-4 times before you’re satisfied with the texture. Continue to add water and stir if you want the barley to be more fluffy/tender, or take it off once the water is soaked up and it’s just slightly al dente. Expect roughly 20 minutes of total cooking time.

* Note adding olive oil to the water really adds flavor to the barley and gives it a softer, more silky taste and texture. The cinnamon is barely detectable, but plays off well with the squash. You can also sprinkle in a dash of nutmeg for earthiness.

Once your barley is done and your squash is fully roasted, toss these together with a splash or two of olive oil, salt and pepper, chopped parsley and a handful of nuts.

I ate this as a meal (with a few slices of Gouda Cheese with Walnuts from Trader Joe’s), but you can certainly serve this out as a side to some roasted chicken.