Honey is one of those pantry ingredients that really elevates everything you could be eating to a new culinary level. Oatmeal, tea, chicken, cheese…Lately, I’ve been on a kick of cooking seafood with honey. Last night, I made a simple marinade for tuna steak: soy sauce, honey, olive oil, garlic, salt and pepper. We seared the steak on our Foreman Grill. Served over brown rice and roasted veggies, with an additional drizzle of soy sauce, it was surprisingly flavorful and tender. My inspiration, though, came from a recipe I made a few nights prior, which I stumbled across doing a search on www.foodblogsearch.com. If you haven’t checked out this site, get thee to it! I’ve found an array of great recipes by fellow bloggers using this search engine. 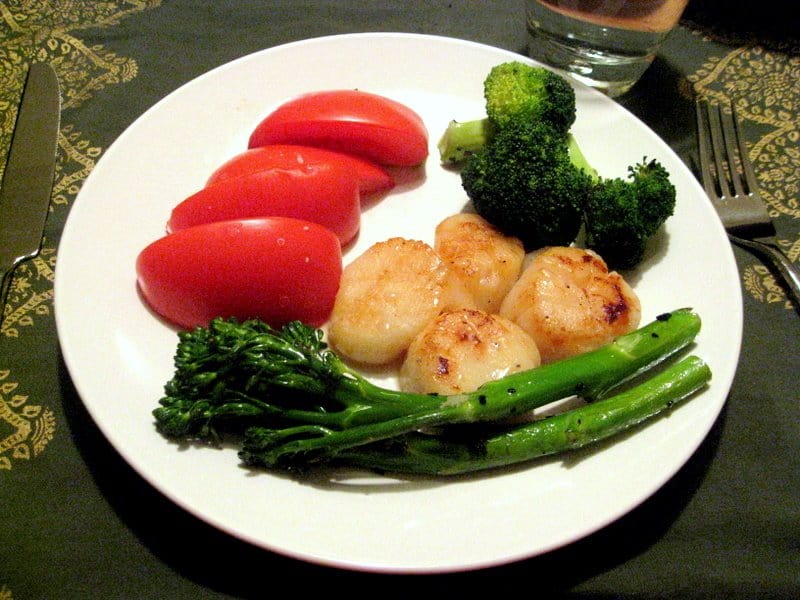 Anyway, I had a bagful of large New England scallops from Trader Joe’s, so thought it was the perfect opportunity to try something new, while indulging in something light. Men in Aprons
has a ton of great recipes…and makes me wish I had a real grill. But, alas, the Foreman had to do–and it didn’t fair too badly. Despite making roughly 8 large scallops, I actually ended up halving the ingredients of the original recipe for the sauce and thought it was plenty for basting. I think the success of this recipe lies in properly defrosting the scallops (if you’re using frozen ones) according to package instructions, being careful not to overcook them, continually basting them and letting them develop that slightly golden honeyed crust. To be on the safe side, I ended up flipping the scallops several times, so the total cook time was probably 10 minutes.

We ate them with sauteed broccoli and broccoli, as well as a side of roasted, salted tomatoes. I can imagine them being delicious over a salad of mixed greens, avocado and blood orange slices. Ahh, blood oranges…I can’t wait until they appear at my market. How I miss my summer peaches and berries…