Sesame-Crusted Tuna on a Bed of Udon Noodles—This Bustle 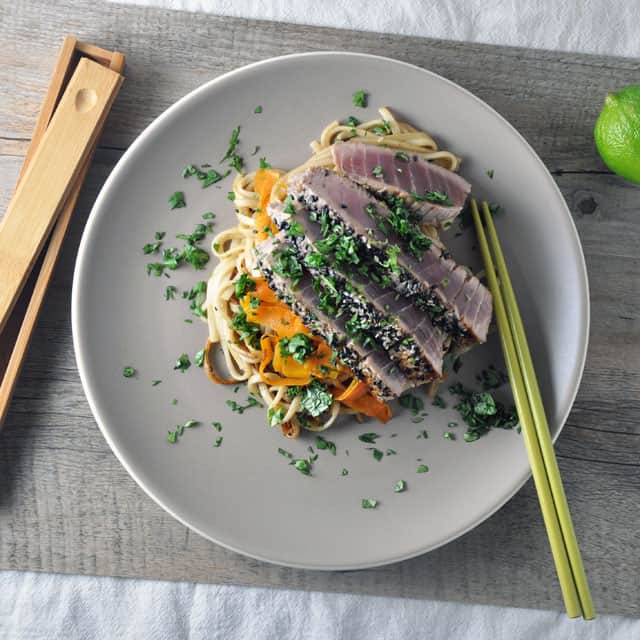 I’m writing this post from Matt’s parents’ house in Ohio, where we’re currently celebrating his dad’s 70th birthday. It’s one of the few times I’m finding myself here at a time other than winter, and it very much feels like a different place. The leaves are changing colors — there are all sorts of brilliant rusty oranges, neon yellows, and deep reds that line the roads and dot the fields. The colors complement the brick houses and buildings that are so prevalent here and so lacking in San Francisco and the West Coast, in general. The temperature, though, feels like summer in California — it’s in the high 80s during the day and low 60s in the evening, with a pleasant, cool breeze. We checked out Matt’s favorite ice cream place today (my second time there in years) — Young’s Jersey Dairy — where I ate pumpkin and cinnamon ice cream (two separate flavors). Last night we went to a pig roast at one of the cousins’ houses and tonight, the relatives came over for lasagna and cake. Being in Ohio is one of the few times when I go with the flow. I feel slower when I’m out here; I sleep longer, I take naps, and I sort of linger because there’s not much I ever have to do. It’s a nice break from the bustle of real life.

Funny thing is, when I’m in a quieter place, mentally, I actually miss the bustle. Or, rather, what I really miss is the taste of home. A few weeks ago, I had a crazy realization: that I’ve lived in San Francisco, in my apartment, specifically, longer than I’ve ever lived anywhere. Longer than I lived in any one of my parents’ houses (including the one they live in now, and the one I often will refer to as ‘home.’). Home is a combination of a lot of different things — mostly it’s the place where you feel most comfortable and where your stuff lives. It’s where you know every nook and cranny, and where you want to hang your pictures. It’s where your cupboards are filled with things that tell a story of who you are (mine is filled with different flours, honey, teas, beans, spices, oils, vinegars, jams, and grains.) Home is the place I share with my best friend. Home is a place where I can cry, play, laugh, experiment (with painting, singing, writing, dancing, lifting weights) without anyone watching, relax, and do absolutely nothing at all.

This meal, pretty different from most of our ‘routine’ meals, strangely, is very much a taste of home. A lightly marinated piece of tuna, crusted in black and white sesame seeds, lightly seared, and set on a bed of sauteed udon noodles. I remember feeling an overwhelming weight on my shoulders as we prepared and ate this meal. I really wanted to have a ‘nice’ Friday night, even though we knew that the weekend ahead would be a busy, working one. We spent the next four or five hours packing Pairings Boxes until we felt so exhausted, we collapsed into bed. I didn’t expect this to come out perfectly the first time I threw these ingredients together, but as we dug in, I couldn’t help but think just how much this meal felt like home, and how little time we have to be in the thick of the craziness and sit back, quietly. Whenever I get too overwhelmed, I try to remind myself that it is this bustle that makes me feel truly alive. 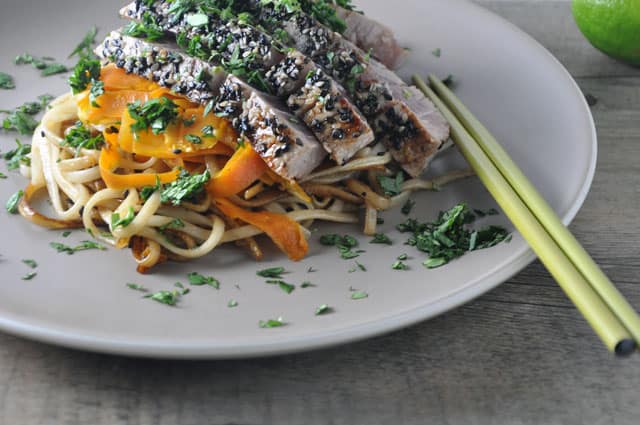 Sesame-Crusted Tuna on a Bed of Udon Noodles
*serves two

For the udon noodles:
1 teaspoon of sesame oil
1 teaspoon of brown rice vinegar
1/2 tablespoon of black sesame seeds
1/2 package of udon noodles (found in the Asian section of grocery stores)
2 carrots, thinly peeled into long ribbons (use a vegetable peeler to peel them)

1. In a medium bowl, mix the tuna with the brown rice vinegar, mirin, soy sauce, and sesame oil. Season with salt.
2. Cook the udon noodles according to package. Drain and rinse under cold water. Set aside.
3. Preheat a stove top grill pan. Once it’s hot, place the tuna on a grill and evenly sprinkle with half of the sesame seeds and sea salt. Cook for a few minutes, then flip the fish and sprinkle with the rest of the sesame seeds and sea salt.
4. Remove the tuna from the grill pan and place it on a cutting board. Cut the fish into thin slices against the grain.
5. Heat the canola oil in a large skillet over medium-high heat. Add the cooked udon noodles, one teaspoon of sesame oil, one teaspoon of brown rice vinegar. Toss in the black sesame seeds. Add the carrots and cook for a few minutes, stirring (until carrots have begun to soften slightly).
6. Divide the noodles between two plates and top with the tuna. Sprinkle with lime zest and cilantro. 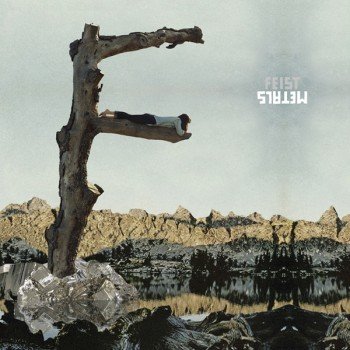 Read more  on the Turntable.