Linguine with Clams, In Gratitude - Turntable Kitchen
Log In or Register
0 Items

Linguine with Clams, In Gratitude It’s rare that we, as young people, step back from our day-to-day routines to realize that life is far grander than our desk jobs, our bad dates, our fleeting unfortunate haircuts, etc. I, like any twenty-something young female, fret about all sorts of things: being good at my job, being on good terms with my family and friends, being comfortable in my body whether it’s what it is now, or twenty pounds heavier, being able to ultimately fulfill what I believe is a full professional life and a full family life, traveling to all of the places that I want to go, my parents’ health, my husband’s health, my own health. Sometimes I worry about little things, and sometimes I worry about big things. A few nights ago, I made this pasta and stuffed myself to the brim. I worried about the fact that I had indulged in a magnificent carb-fest two weeks before a beach vacation. But a few hours later, I worried about something much more significant: my grandfather’s immediate health.

My grandfather is the strongest person that I know. He not only achieved the impossible and helped me get an A- in Algebra 2/Trig my junior year of high school, but he also has lived through some of the most significant events in history and left the entire world that he knew to come to America and live with my family. He goes to the Russian store every week to buy bread, butter, sour cream and an assortment of cold cuts. He does not eat pasta–unless it is with butter. He doesn’t believe in vegetarian soups, but now in his eighties, has started to make some serious gastronomic breakthroughs.

He has, through the years, been my most ardent supporter, defender, friend, teacher and mentor. It took me years to learn this. But I’m there now. I’ve been there for several years now, and I can’t think of many things I’m more grateful for. I might not know that any time I’m facing a ‘crisis,’ most of the time, it will blow over and be a distant memory. But I do know that I appreciate my grandfather–all of his little quirks, long-winded stories and bear hugs. I do not think my grandpa would like this pasta. But that is why I think we’re such good buds–we can always agree to disagree and move on. With you, though, I’m sharing this pasta, which is playful and flavorful in the tenderest of ways. The clams cook in a light wine, red pepper and garlic broth, which gives the linguine a delicious aroma and slippery bite. The breadcrumbs (which, I’ll admit, I nibbled on before and after I threw into the pasta) add nice texture and crunch to the whole dish. It is, in a word: gratitude. For all of the things that matter in this world. 1. Preheat the oven to 400 degrees F and bring a large pot of salted water to a boil over high heat.
2. With your fingers, mix the bread crumbs with 2 tablespoons of olive oil, a few pinches of salt and a 1/4 teaspoon of wine. Spread evenly on a baking sheet and toast for about 5-7 minutes (until golden). Season the breadcrumbs with pepper and set aside (in a warm place).
3. Put the tomatoes into a small bowl, season with some salt and set the bowl aside.
4. Cook the pasta until just tender (according to package instructions).
5. While the pasta is cooking, add the garlic, red pepper flakes, clams, remaining oil and wine into a non-stick skillet, cover and cook over high heat, shaking occasionally until the clams have all opened (about 2-5 minutes). Throw out any unopened clams. Take the lid off of the skillet, reduce heat to medium-low, and taste the broth. Add salt and pepper, if needed.
6. Add the tomatoes and herbs to the skillet, stir gently and simmer for a few more minutes.
7. Drain the pasta and add it to the skillet, tossing well to combine.
8. Serve pasta into individual bowls and sprinkle with bread crumbs. 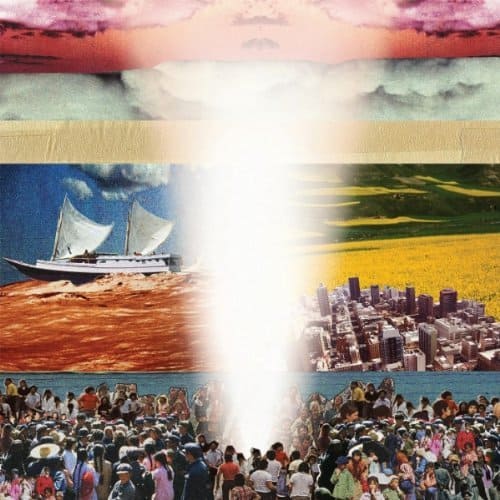 Linguine with clams is a classic spring/summer recipe. It is flavorful, clean and refreshing. Plus, Kasey kept things relatively healthy by using whole-wheat linguine, olive oil, white wine, tomatoes, homemade bread crumbs and a collection of fresh herbs with garlic. As you can tell, there aren’t really that many ingredients in the recipe: it is a simple, direct and flavorful meal. And the recipe’s simplicity is the only significant way in which it arguably parts ways with today’s pairing – the latest full-length by Broken Social Scene: Forgiveness Rock Record. Nonetheless, despite the fact that the album consists of 14 expansive, epic tunes that are bursting at the seams, Forgiveness Rock Record is actually the Broken Social Scene version of direct and concise. The instrumentation is tight and these songs know where they are going, rarely straying off course or meandering. So it isn’t really that different from the linguine with clamsfeatured on eating/sf. And what’s more, it also works as a great pairing for this recipe because it is refreshing, upbeat and perfect for the spring/summer. More at Musical Pairings @ eating/sf. —Matthew


Phyllo-Wrapped Tilapia and the Elements of Home