The other day, I sent out a tweet that was meant to be a direct message to someone, only it was projected to the entire world. I panicked (naturally) because the tweet was not entirely innocent and raced to sign on to Twitter’s homepage to delete said racy message. After missing my heartbeat for a moment or two, I did a few quick searches and was satisfied to find out that my mistake would not be found. I breathed a sigh of relief. And then I started thinking about this here little space.

A few years ago, publishing a blog where you discussed your thoughts, opinions about your job, your boss, the girl who annoyingly talks on the phone next to you on the bus every morning, your bad date, etc. was hardly a problem. The internet was big but few people thought much about other people actually being able to find that information.

My senior year of high school, I had a Livejournal–remember those? Initially, I blogged about my last summer in San Jose with my friends before college, dating disasters, anticipation for my move out of my parents’ house and TV shows. By the time I got to college, I still hadn’t thought much about anyone actually caring about my little old online journal until I developed a rather drawn-out crush. I had decided to pour my heart and soul into a blog post that I must have mistakenly thought was the equivalent of writing in my diary. And boy did it come back to kick me in the ass. Nowadays, I wouldn’t dream of doing such a thing but back then, I had no concept of just what it meant to write something on the internet. I’m not sure why I’m telling you this story when I’m supposed to be telling you about these shrimp which are–delightfully unexpected in so many ways. I realize that I’ve told you about shrimp a lot–some days I feel like Bubba from Forrest Gump–but hear me out. I received three volumes of Canal House Cooking from my parents for my birthday and I devoured all three books in a matter of hours, my eyes lighting up. I wasn’t quite sure how I was going to feel about these shrimp but once we made them, I knew they were a winner. Delicately salty, slightly citrusy and oh-so-buttery, there are few words needed to describe these. Big bang would be appropriate. Sometimes you’ve got to expect the unexpected: shrimp + anchovies + butter = absolutely delicious.

1. Prepare your indoor grill pan–oil lightly and heat over medium-high heat.
2. Combine the butter and chopped anchovies along with a teaspoon or two of oil from the anchovy tin in a small skillet over medium heat. Stir occasionally to break down the anchovies and mix well with the butter. Lower heat to warm while you grill the shrimp.
3. Grill the shrimp for a minute or two on each side, allowing nice grill marks to develop.
4. Transfer shrimp to a serving dish and generously pour the anchovy butter over the shrimp. Squeeze some lemon on top. Serve with additional lemon quarters. 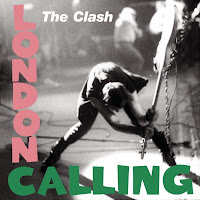 Today’s recipe on eating/sf – shrimp smeared with anchovy butter – is anything except subtle. It is bold and features some in-your-face flavor (in a good way). And I even found it to be slightly subversive in that the anchovy butter mingles with the natural flavor of the shrimp in such a way as to defy your natural expectations by creating a surprisingly complex overall taste. So I wanted an album that is somewhat subversive; an album that is bold; an album that is anything but subtle for today’s Musical Pairing. I chose The Clash’s London Calling – and album that fits that description like a glove. More at Musical Pairings. –Matthew