Duck is the sort of thing I generally only order at expensive restaurants as a once-in-a-while treat. When I want to give myself a pat on the back, or celebrate an occasion, I say, “I’m going to have the duck.” When I see it on a menu, my eyes rarely glance at anything else (besides dessert, of course). I love how duck is the opposite of chicken in many ways: fatty and rich, almost game-y and assertive. Duck is a staple in many cuisines around the world, but I must admit that most of my experiences with duck rarely stray outside of French and Californian contexts.

When the Los Angeles issue of Saveur magazine arrived in my mailbox a few weeks ago, I voraciously devoured the cover (squash blossom pizza?!) and then proceeded to drool over all of the restaurants, markets, taco shops and ice cream shops discussed at length. The city I thought I knew so well–from so many frequent visits and stays with friends–seemed like an undiscovered gemstone. As I dove deeper into the issue, I felt as though I’d been traveling to some faraway place. With some really unique cuisines. What have I been missing all this time?

As I flipped through the pages, one recipe immediately caught my eye–crispy braised duck legs serve with udon noodles tossed with bok choy, oyster mushrooms, some spicy red chiles and a salty-sweet glaze-like sauce. I knew I had to make it. There was only one little twinge of hesitation: I had never cooked duck before. How could I take my indulgence, bring it into my kitchen, and take all of the specialness out of eating duck out? I mean, that’s pretty much the same as giving up on Santa Claus or the Tooth Fairy. I thought about this for a minute and then I made this dish, and I haven’t looked back. It was–in a word–phenomenal. I cooked with a few ingredients I’ve never cooked with before and I even took a big chance with a food allergy. I cut down the mustard quite a bit as I’m ever so slightly allergic to it, and I didn’t even mind that my lips itched slightly after eating this.

We made a few changes to the original recipe (doubling the amount of duck, as the legs don’t have a ton of meat on them, cutting back on the bok choy slightly) and I’m still thinking about it. Not only was the duck tender as sin, it was full of flavor–slightly sweet, slightly sour, with an occasional bite of ginger or coriander. The noodles were luxuriously creamy and absorbed every bit of the sauce that they were tossed in.

While now that I know I can cook duck in my own kitchen, I still think I’ll continue to get excited whenever I see it on restaurant menus. This recipe has proven to me that duck offers endless possibilities for flavor profiles and LA (the location of the film catering company that provided this recipe) has a lot more to offer than I’ve been giving it credit for all these years. 1. Preheat the oven to 350 degrees F and season the duck with salt and pepper.
2. Heat a 12″ nonstick skillet over medium heat and place the duck, skin-side down into skillet, cooking for about 18-20 minutes and turning only once (until the legs are browned and crisp).
3. Place the duck legs on paper towels to soak in some of the grease and discard the fat from the skillet.
4. Combine the chicken broth, 1/2 cup of soy sauce, coriander, 1 chile, vinegar and 1 cup of water in a dutch oven. Bring to a boil and then add the duck, skin-side up. Cover the dutch oven and transfer to the oven. Braise the duck for an hour and a half to an hour and forty-five minutes (until it’s tender).
5. Remove the duck legs from the liquid and discard the cooking liquid (keep in mind it’s full of fat, so don’t pour it down the drain).
6. Make the sauce by combining the rest of the soy sauce, chopped garlic, ginger, sesame seeds, mustard, sesame oil and green onion in a small saucepan. Heat over medium-high heat, bringing the mixture to a boil, then set aside.
7. Bring a large pot of lightly-salted water to a boil. Add in the udon noodles and cook until tender (2-3 minutes). Drain the noodles and toss them with a tablespoon of canola oil.
8. Heat two tablespoons of canola oil in a large skillet over medium-high heat and add the 2 chiles, mushrooms and boy choy leaves, cooking until the bok choy is just wilted. Add the noodles and 1/2 cup of sauce, tossing to combine. Transfer the noodles to a large bowl.
9. Add another tablespoon or two of canola oil to the skillet and add the duck skin-side down. Cook it for about 4-5 fines minutes, until it is crisp.
10. Pat the duck with paper towels to absorb grease and brush it with the leftover sauce.
11. To serve: scoop generous helpings of noodles into two bowls and top with the duck legs. 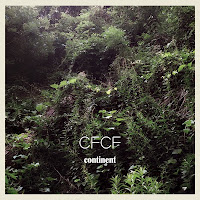 We were feeling a little experimental this weekend, and decided to make something a little different. Specifically, we decided it was time to try to prepare duck at home. I’ve always been a big fan of duck recipes when dining out, but for some reason Kasey and I have never summoned the courage to try to prepare it at home until now. Surprisingly, it wasn’t too hard. And the result was fantastic: crispy, braised, tender duck meat sitting on top of a bed of udon noodles and with bok choy and oyster mushrooms. Everything about that recipe screams awesome. It’s a flavorful, crisp meal with slick presentation, and calls for an album that shares these qualities. For this reason, I’m pairing this one with CFCF‘s 2009 debut album Continent. Head to Musical Pairings to read the rest. –Matthew