A Different Kind of Crepe: Buckwheat Galette with an Egg - Turntable Kitchen
Log In or Register
0 Items

A Different Kind of Crepe: Buckwheat Galette with an Egg 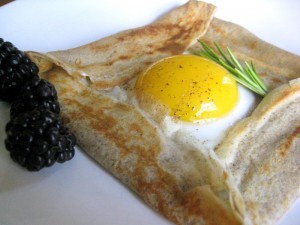 Update: October 31, 2010: This recipe can now be found in Foodista’s Best of Food Blogs Cookbook: 100 Great Photographs, Recipes and Voices. Buy it on Amazon!

The first time I went to Paris was with my family, when I was in the 9th grade. We traveled with a tour group called Globus and each got a bright red bag and a seat on the double decker bus, which promptly made stops at every landmark, but only stayed so long. I could have subsisted on crepes au sucre while in Paris, if I had my way. A savory crepe was nowhere near my radar. To this day, I must admit that I will order a crepe with Nutella or lemon sugar over one with ham and cheese on 99.9% of all occasions.

My crepes are something of a legend amongst friends who have visited and been forced (forced!) to eat the breakfasts that I prepare for them. On many of these occasions, I bust out my trusty crepe pans and whip up a batch. I then lay out a spread of jams, honey, fruit and sugar to go along with them. When we make crepes at my parents’ house, there is often a container of caviar for those craving the savory. I have made strides in my savory crepe consumption–mainly fueled by my deep love of cheese and caviar. I have also decided that it’s time to experiment with my crepes.

Armed with a bagful of buckwheat flour, I set out to make a different kind of crepe: a galette (a French buckwheat crepe). I was also ready to improve upon my experiments with eggs and try making a savory galette topped with an egg. It seemed like it would be kind of tricky at first, and I was prepared for burned fingers, but ultimately, my little experiment turned out quite well–and led to some lovely pictures.

I adapted a recipe by my favorite blogging Francophile, David Lebovitz. I used lower fat milk, whole wheat flour, and halved the whole recipe. Lastly, I added a fun touch: an egg in the middle. One thing to keep in mind–this recipe requires some thinking ahead: you’ll need to whip up the batter the night before making it. But don’t worry, it’ll only take you five minutes. The real work comes in the morning.

Buckwheat Galette with an Egg

2 eggs (for the topping)

1. Place all of the ingredients, save the last 2 eggs, in a blender and whisk until combined. Pour into a tupperware and set into the fridge overnight.

2. In the morning, take your batter out from the fridge and let it sit for about 30 minutes to an hour. Pour about a tablespoon of milk to it and stir around.

3. Place a crepe pan on the burner (over medium-high heat) and melt a pat of butter in it (you can use a silicone brush to coat the pan).

4. Pour 1/4 cup of batter into the pan and tilt it to swirl the batter around until it coats the pan. Your first crepe is always going to be experimental. The fresh butter might make it a little clumpy or bubbly and it might not cover the pan properly–don’t worry, you’ll get into the swing of things after 1-2 tries.

5. Cook for about one minute or so. Use a spatula to lift an edge–if it’s slightly golden, it’s time to flip. Once you flip, cook for another 45 seconds or so. The amount of time that you cook the galette depends on many factors: your stove, the type of pan you’re using, how thick the batter is, etc. You might also need to adjust the temperature–my crepe pans work best on medium-high heat, but this might be too high for your stove and could burn the crepes. Start with medium heat and increase or decrease, depending on how long the crepes are cooking for. My best advice is to lightly lift the edge of the galette to see if it’s starting to change color before flipping. The edges will usually be slightly crisped.

6. I usually make about 2-3 galettes before using my silicone brush to add a little more butter to the pan. I like to use the brush because it guarantees even coverage and never creates big clumps of butter that cause the batter to curl in places. The galettes should peel off the pan easily.

7. To keep the galettes warm as you cook more, here’s a trick: set a big pot of water on a nearby skillet. Top with a large plate and bring to a boil. Place the done galettes on the plate–the boiling water underneath keeps the plate warm.

8. So, considering this recipe makes about 10 galettes–that means two people could each eat 4 galettes on their own (or with a swipe of jam or Nutella and some berries on the side) and each have a galette topped with an egg.

9. When you’re done making all of the galettees, place one back onto your crepe pan. Carefully crack one egg into the center. Use a fork to sort of spread the egg whites around the entire galette (but be careful to not disturb the yolk!). Salt and pepper. At this time, you could also throw in some cheese–shaved Parmesan, or maybe some Gruyere. When the whites have thickened and are universally white, use a spatula to lift the sides of the crepes and gently fold over as you would an envelope, but leave a nice center hole for the yolk. Slide your spatula under and place on a plate.

Here are a few links for more inspiration: 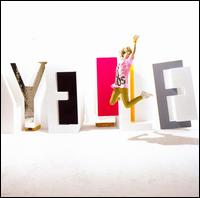 I’m pretty tuned out when it comes to pop music. Some people I meet will occasionally make the mistake of assuming that because I listen to music they’ve never heard of, I know everything about all music.Because I ride public transit, I don’t listen to the radio very often, so it’s not uncommon for me to overlook something played on modern, alternative rock radio, or other pop music outlets.

The first time I came upon a track by French, electro, hip hop artist Yelle I thought I had discovered a completely unknown commodity – some sort of indie, blogger secret. So I was mildly surprised when I heard “Je Veux Te Voir” during an episode of Entourage. But I was really surprised several months later when I learned that she was receiving heavy rotation on MTV as their Artist of the Week. Nonetheless, Yelle rightfully receives some indie cred – most likely because she is another example of the rags (i.e. Myspace) to riches (i.e. mainstream success) story that has become not entirely uncommon in the past few years. I guess that makes her sort of like a French version of M.I.A. or Lily Allen: simultaneously embraced by both the mainstream and underground. Of course, it’s really no surprise that her dance-y debut album, Pop-up, was such a success. After all, it is really good. Check out Musical Pairings for the complete review and to find out the winner of the first Musical Pairings giveaway–a limited edition Iron and Wine CD from Record Store Day. –Matthew

A Triple Chocolate Cookie in Place of Your 70% Bar