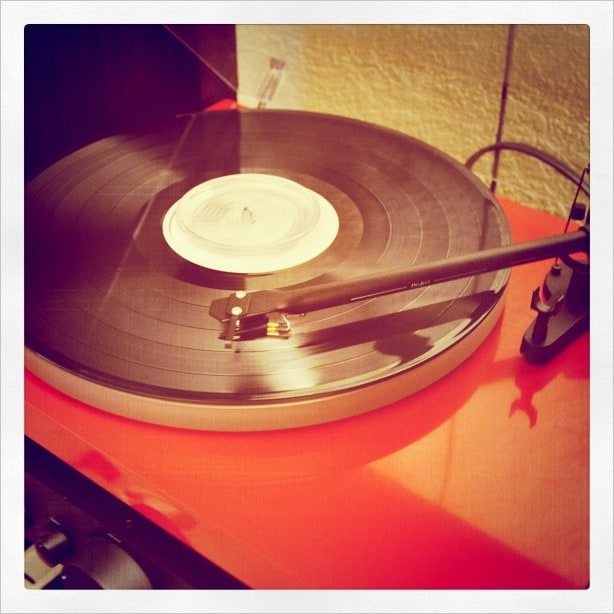 You’ve probably noticed that we like vinyl records in our home.  For example, at the end of many of my posts, I gently nudge our readers towards Insound to buy our featured albums on vinyl instead of digitally from iTunes.  Beyond that, we did name our site Turntable Kitchen.  Friends who haven’t started collecting records yet, but who are interested, always ask me two questions: 1) Why should I buy a record player / start collecting records, and 2) Which record player should I buy?

I’m going to do my best to address both of those questions.  First, here is TK’s Top 10 Reasons to Buy a Turntable:

Let me start with a caveat: a bad turntable will only sound a little better than a bad CD player. Maybe even worse. But if you are serious about listening to music with high quality sound reproduction, in my opinion, vinyl is the way to go.  But let’s be fair, sound can be subjective.  What sounds great to you may not sound great to me.  But with a turntable, as opposed to a CD player, you can experiment with the factors that effect the sound quality.  You can upgrade your catridge, your platter, your tone arm, your power source, etc.  You can also tweak the components you do have until you find the sound you are looking for.  That is pretty much out of the question with a CD player.

Further, most audiophiles believe that analog/vinyl sound reproduction just sounds warmer and fuller than digital reproduction.  The debate as to which is better, analog or digital, has been raging pretty much since the birth of the CD, but to this day, if you visit almost any audiophile forum on the Internet, you’ll discover that vinyl is the overwhelming choice.  If you want to read some of the pros and cons you can check out this thread on Google Answers.  For my part, there is no question as to which I prefer.

I recall the first time I put vinyl and CD to the sonic taste test at a hi-fi store in San Francisco.  For the test, I listened to Spoon’s Gimme Fiction first on CD and then on vinyl using the exact same amplifier and speakers and standing in the exact same location. The CD was fine and sounded the same as it always had for me — but when we played the record on vinyl, it was as if I was hearing the album (one of my favorites) for the first time again. To explain, let me first provide a definition: a “soundstage” refers to the quality of music reproduction that allows the listeners to focus on specific instruments and elements of a song in relationship to where those elements are placed on an imaginary 3D/2D stage. With the vinyl copy of the album,  the sense of depth and sonic separation was amazing. I closed my eyes I felt like I could sense an actual physical space where Britt Daniel should be standing in the room leaning into his microphone, playing guitar and singing the lyrics to “The Beast & Dragon Adored” relative to where the other members of the band would be. Put another way, the richness of the music wasn’t just about the reproduction of the music – but the reproduction of the space between the sounds that allowed it to be perceived as three dimensional.

2. Most Vinyl Records Include Digital Downloads

It’s quickly becoming industry standard to include  a digital download of an album with a vinyl record.  So when you buy Best Coast’s Crazy For You for slightly more than the cost of a digital download from iTunes, you get both the vinyl record and the MP3s.  In other words, I’m not suggesting you don’t maintain a library of digital music at all – but that you maintain both.  Usually the cost of a new record is only slightly more expensive than buying that same album on iTunes – and then you have the vinyl copy to listen to at home and the digital copy for when you are on the go.  Now if only they’d start doing that with books.

Best Coast – Crazy For You

Sure you could have all of your books and music and media stored somewhere in the cloud or on your computer, but if I don’t have a physical copy I don’t feel like I really own the product.  Besides, decorating your home or apartment with shelves lined with records and bookcases neatly arranged with books is just sexier and warmer than an empty room with little more than a Macbook sitting on a table. Especially if you own a sexy turntable like the Pro-Ject Debut or the Bang and Olufsen Beogram 5500.

I’m not suggesting that vinyl records are exactly a smart investment option, but many records actually increase in value after you purchase them.  Compare that to a CD where you’d be lucky to get back even half of what you paid – and I wouldn’t recommend trying to re-sell the MP3s you downloaded from iTunes.  Meanwhile, copies of Modest Mouse’s Good News For People Who Love Bad News actually sells for as much as $150 on eBay.  I wonder how much the limited-edition, hand-numbered TK 7″ releases are going to be selling for a few years from now.

5. Records Are Fun To Hold

I love when I get a new record in the mail.  It’s fun to open it up and behold the actual record – black vinyl, white vinyl, etc.  As I mentioned above, actually holding a record gives me a greater sense of ownership than merely clicking play on my iTunes.

Album art is way cooler when it is in 12″ x 12″ format as opposed to the tiny little CD booklets or some sort of digital .zip file that I’ll never actually look at.  In fact, not only does the cover art for your favorite album look cooler, but so do the vinyl sized inserts and liner notes.  People frame and display vinyl record sleeves at home all the time.  When was the last time you saw someone frame and hang a CD booklet?

For me, the ritual involved in playing my records is delicious.  I’ll thumb through my record collection delightedly examining the spines of the records in my library before my fingers come to rest on the album I’m seeking.  I’ll carefully pull the record out and remove the LP from the jacket.  I examine the surface of the record in the light for dust and, if necessary, swiftly brush off any lint or dust that has collected.  Next, I carefully place the record on the platter and clamp it to the spindle.  I quickly blow on the stylus to remove any dust or fuzz that has collected there before lifting and subsequently lowering the needle to the record.  The soft thump I hear when the needle makes initial  contact with the vinyl is alone worth savoring. If music is a religion, then this is the sacrament.

9. Some Albums Are Only Available On Vinyl

Increasingly, as vinyl becomes cool again, some albums are only being released on vinyl.  Flaming Lips, for example, have released a number of records and collaborations recently in vinyl-only format, and Record Store Day (a.k.a. the biggest holiday of the year for music obsessives like myself) is pretty much dedicated to featuring vinyl-only exclusives.

10. You Need A Record Player To Play Your Turntable Kitchen 7″

Of course the main reason you’ll want a record player is to play those awesome Turntable Kitchen singles you’ll be receiving every month once you sign up for our Pairings Box!

Convinced?  Stay tuned for our recommendations on which decks to buy.  If you don’t want to wait, you can’t go wrong with the Pro-Ject Debut III.