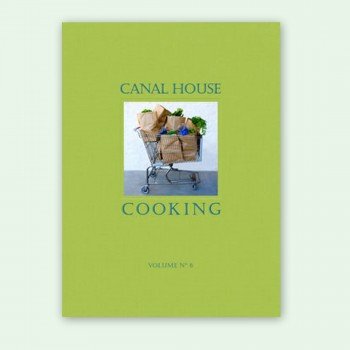 We’re big fans of the Canal House books. We first learned about them from Molly over at Orangette, and bought a few individual books, until we realized that we wanted them all. So we got a subscription. A Canal House Cooking subscription is a gift that keeps on giving. For $49.95, you get three books in the mail per year. Each book is catered to a particular season. More than just cookbooks, the Canal House books are narratives that include suggestions for drinks, preparation techniques, variations on ingredients and personal stories from the authors (who happen to be former food editors–one of whom was the founding editor of Saveur, one of our favorite food magazines). Almost everything we’ve made from the books feels special, without necessarily being laborious. The authors aren’t afraid of putting homey recipes like beans and sausages alongside more unique ones like broiled mussels or matambre. We don’t make the same recipes over and over often, but most everything we’ve made from these books, we’ve made on numerous occasions. These include the Chicken and Scallion Dumplings and Grilled Shrimp with Anchovy Butter.

We just received a copy of their latest book, Volume 6: The Grocery Store, and we can’t wait to cook from it. For those of you who have always wanted to check out the books, or many of you who have never even heard of the series, we thought we’d give away a copy of Canal House Cooking Volume 6, so you could discover what we have.

And a reminder: If you like our site (and the fact that in addition to food, you can discover some really awesome music to go with it)…don’t forget to vote for us in the MTV O Music Awards for Best Independent Music Blog. xoxo.

You have until 12:00 p.m. PST on Monday to leave a comment. A winner will be selected at random. You have to check back on the site next week to find out if you’ve won (we’ll announce the winner in a post next week).

Contest: Win Tickets to The New Pornographers at The Regency Ballroom this Monday!

Single Serving: The Antlers – Every Night My Teeth Are Falling Out