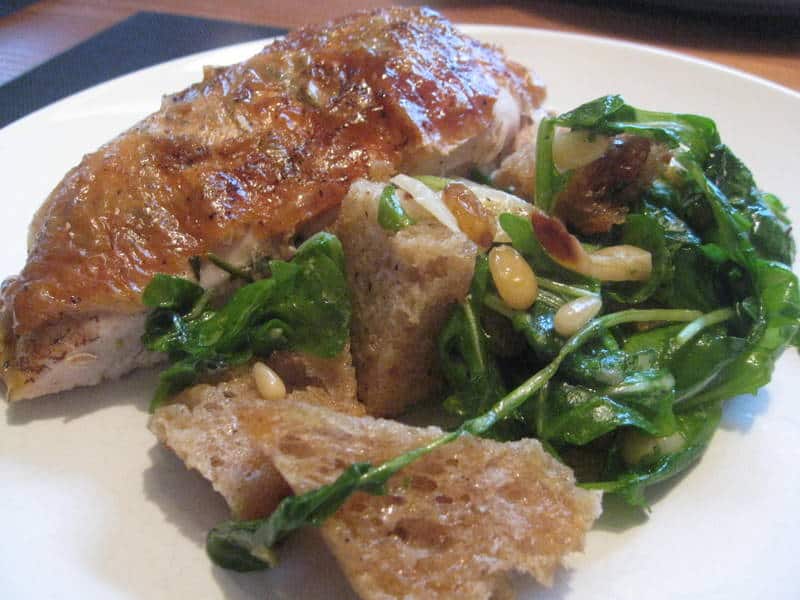 Ever since I tried the famous Zuni chicken + bread salad, I have recreated the dish at home a total of two times. Had I known how easy it was to make, and had I tasted the deliciousness say, four years ago when I first moved to San Francisco, I would have probably made this recipe twenty times. Because that’s how good it is. Just do a Google search and you’ll find pages upon pages of people freaking out over its crispy skin. And the moist, flavorful meat. Don’t even get me started on the bread salad. I could probably eat the equivalent of one whole loaf of bread all by myself–if it were chopped into this salad.

There are many, many recreations of the Zuni Chicken and Bread Salad. The one that made the most sense to me and had the simplest instructions was from Deb over at Smitten Kitchen. Deb rarely disappoints. And you better bet that Zuni Chicken never disappoints. The first time we made this dish, we didn’t make the bread salad. We had some fresh favas and carrots instead. Now that I’ve had the chicken with the salad, though, it’s hard to imagine it any other way.

I made a few minor, minor changes to Deb’s recipe. Namely, I did not have in my possession any currants, so I followed the recipe with golden raisins instead. Worked perfectly. I also slimmed down the bread salad recipe for two people versus four.

Now, let me warn you. It’s a long recipe. But not hard. I’d give it a couple of good reads before getting started–I think it’ll be worth your while. 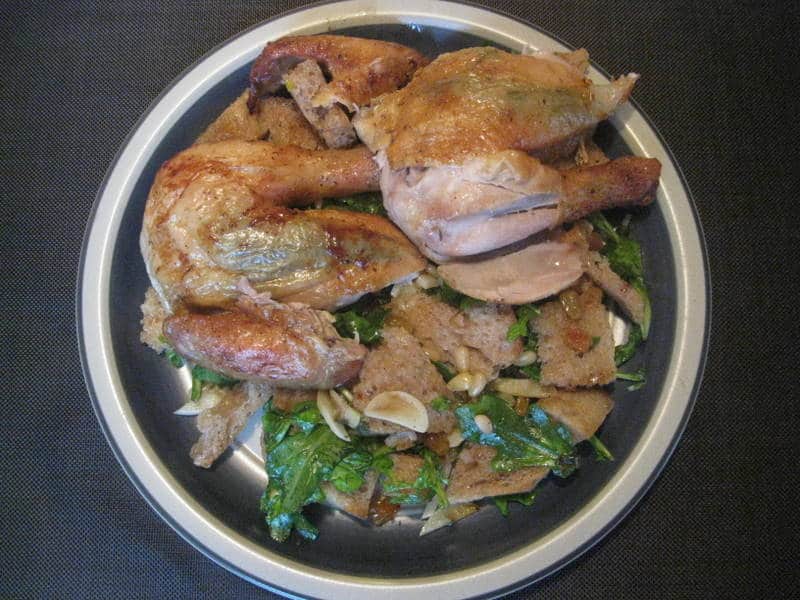 One small chicken (3.5 pounds)–it has to be small!
4-6 sprigs of fresh thyme and rosemary, as well as about 1 teaspoon of dried marjoram
1 teaspoon of salt
1 teaspoon of freshly cracked black pepper

For the bread salad:

1. 24 hours prior to making the chicken, season it. Cut out the fat from inside and rinse it thoroughly. Wipe it completely dry, both inside and out.

2. Loosen the skin under each of the breasts, making 2 pockets. Then, loosen the skin on the outside of the thighs–at the thickest part–again making 2 small pockets. Place 2 herb springs, and a sprinkle of marjoram into each pocket.

3. Generously rub down the chicken all over with the salt and pepper. Tuck the wings under the shoulders, place the chicken into a medium-sized glass dish and cover with plastic wrap. Refrigerate for 24 hours, and up to 48.

4. Begin prep on the bread salad: preheat the broiler. Remove the crusts from the bread and tear it into uneven chunks.

6. Heat some olive oil in a skillet and toss in the garlic and green onion, cooking until softened, but not colored.

7. Toss the bread with a few tablespoons of olive oil and lay out on a baking sheet. Sprinkle the pine nuts into the bread and broil, just briefly, until the edges turn a light golden brown. Remove from the broiler.

8. Prepare the dressing: whisk together the remaining olive oil, vinegar, salt and pepper. Toss about half of it with the bread. Add in the garlic and scallions. Drain the raisins and fold in. Mix about a tablespoon of water with a few pinches of salt and fold in, tossing all to combine. Pour it into a baking dish, cover with foil and set aside.

9. Preheat the oven to 475 degrees F. Preheat a large cast iron skillet and place the chicken breast-side up in the skillet. Let it hiss and sizzle for a few minutes.

10. Next, place the chicken (in the cast iron skillet) into the oven and set your timer to 20 minutes. It should begin to brown–if it doesn’t, raise the temperature until the skin begins to blister (but not burn).

11. After the chicken has been in for a total of about 30 minutes, carefully (and I do mean carefully–some of us might forget that the skillet handle will be HOT) take it out of the oven and flip it onto its back. Return to the oven and roast for about 15 more minutes (more or less, depending on how big it is).

12. Remove the chicken from the oven again, flipping it back onto its breasts and crisp the skin for another 5 to 10 minutes. At this time, make a little room in the oven for the bread salad. Keep the baking dish covered with foil and bake for about 5-10 minutes. Insert a meat thermometer into the chicken and make sure that it’s done.

13. Remove the chicken from the oven, and lift it onto a plate. Pour the clear fat out of the skillet, leaving the drippings. Add a few tablespoons of water to the pan and combine the drippings with the water. Pour the bread salad back into the mixing bowl.

14. Prepare the chicken by cutting the skin between the breasts and thighs, and tilt it over the roasting pan to drain any juices back into the drippings. Let rest.

15. Add a few spoonfuls of the drippings into the bread salad. Add the arugula, a drizzle of olive oil, and a drizzle of leftover vinaigrette to the salad, tossing to combine.

16. Cut the chicken into pieces and serve atop bread salad.

If you are a regular reader of eating/sf, you know that Kasey and I are new converts to the church of Zuni roast chicken. Before we actually visited the restaurant, I was pretty skeptical. After all, I like roast chicken, but could any roast chicken be so good it would actually be notable? It’s interesting to me how you can hear so much about a restaurant, but never quite get around to actually checking the place out. For me, Zuni was a great example of this. I’ve lived in San Francisco for nearly 8 years, and it took me nearly this long to make it to this local institution. Once I finally did, it took one bite to make me a convert. And while many of our readers don’t live in San Francisco, and can’t make it out to the actual restaurant, this recipe is a very close second best (if not better!). This can happen in the music world too. I’d heard of Califone for the first time probably back in 2001 or 2002, but it took me a number of years before I actually listened to one of their albums. Once I did, I found myself wondering why it had taken me so long. The Zuni roast chicken recipe is flavorful, complex and gourmet, yet rustic. Califone’s first full-length, 2001′s Roomsound, is likewise complex, rustic and masterful, and therefore is a fitting pairing for this recipe. For the full review, head on over to Musical Pairings. –Matthew