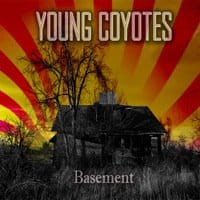 Sometimes finding our next local pairing can be tricky business. This is especially true when I have no starting point or frame of reference for a local scene. For example, in order to find the perfect pairing for Denver, Colorado, I had to wade knee-deep in the polluted, murky waters of Myspace listening to streaming MP3s by numerous bands from the Denver area. As you’d probably expect from any local scene anywhere in the world, the majority of what I heard was uninspired and boring. Some of it was nearly un-listenable. Somehow, I emerged from this quagmire and in the meantime managed to happily stumble upon Denver’s best kept secret: Young Coyotes. Young Coyotes is a two-piece consisting of Adam Halferty and Zach Tipton. The two have been playing together as Young Coyotes for just over a year, and on March 10 of this year they simultaneously released their first two EPs: Basement and Exhale. Both serve as remarkable initial offerings that will virtually guarantee Young Coyotes a tremendous amount of buzz in the next few months.

Acoustic strumming, hand claps, glockenspiel chimes, and multi-layered, harmonic howling lead the way on Basement‘s opening track “Momentary Drowning.” The basic arrangement (acoustic guitar, glockenspiel, multi-layered harmonies), anchored to earth with slow, steady percussion, serves as a basic blueprint for the entire EP. Despite the dark lyrical content of many of its songs (“Where Were You While I Was In The Fire” and “Hell Is” for example), Basement‘s overall feel is giddy, earnest and a warm earthiness. The second track, “When I Was In The Fire,” could easily act as the band’s first single. Ringing chimes, naked guitar riffs and tight, controlled drumming drive the track forward. The song’s pace slows for the chorus, as Halferty and Tipton shout in unison, “I burned down the forest so / light shines on the river now.” When the band reaches the bridge, the duo again sing in harmony, “where were you while I was in the fire,” over bright chimes and doo-wop backing vocals. Like the rest of the EP, the track is precise, upbeat and exuberant.

For the Exhale EP, the band drops the glockenspiel entirely and pretty much eschews the harmonized vocals that dominate much of Basement, instead adopting a echo-y, distant melancholy. The general giddiness and exuberance of Basement is unceremoniously thrown over board, and instead, Exhale is more plaintive and subdued. It often sounds like the band recorded most of the EP while slightly-drugged at the bottom of a stone bell tower. Different versions of the track “Splitting Prisms” appear on both EPs, and as a result, serve as excellent points of comparison for the tone of the different EPs. The track is slowed for the Exhale EP, but remains musically and lyrically vivid. Tipton sings on the track, “the sky is opening / and its letting all the colors bend / splitting prisms leak upon our forehead / and we are finally forgetting all of our memories.”

A free download the Basement E.P. is available from the band’s website. Both EPs can be downloaded from iTunes and are definitely worth the cost.

Below are a few links directly from the band’s website to a few tracks to sample if you need further convincing:

Finally, you can also download a four song set by Young Coyotes from Daytrotter.

Here is a sample from the Daytrotter session:

Finally, please head back to our homepage to read Kasey’s review of Cuba Cuba in Denver, Colorado.