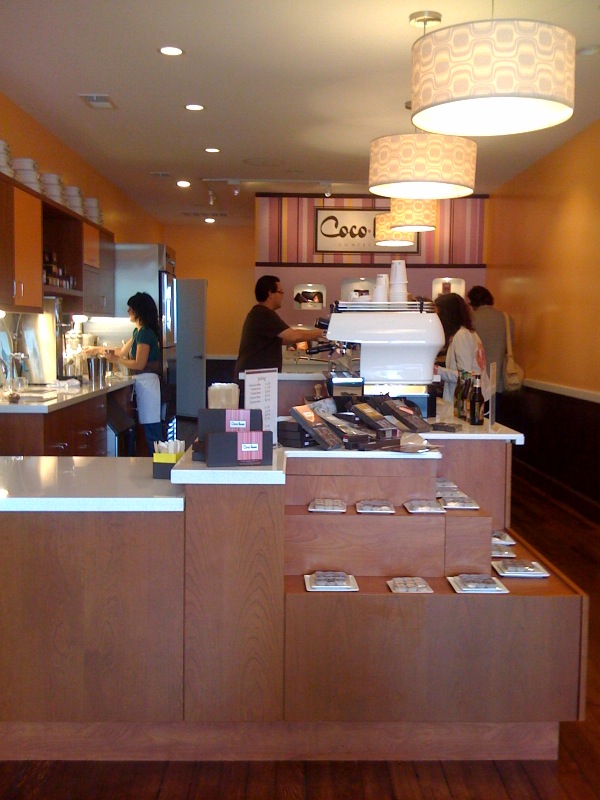 If you’ve been to Italy, you may have had the opportunity to discover that Italians don’t do powdered Swiss Miss with dried up mini marshmallows. And bless them for that! The first time I ordered a hot chocolate in Italy was at a historic cafe in Siena–the medieval town where I studied abroad my junior year of college. When it came out–in a smallish cappuccino cup, it was thick as sin. There didn’t seem to be an ounce of water in it. Or milk. It was just that: hot. chocolate. Since, I’ve had similarly-made hot chocolate at only one other place–Cafe del Doge in Palo Alto. It was thick and creamy and not too sweet–nearly how I remembered it!

This weekend, I was strolling down Haight Street and came upon Coco-Luxe. Disclosure: I’d seen it before from the window of the 43 bus and zoned in on it. I ordered their $4 chocolate pudding. The guy behind the counter told me there is no milk in it. It was basically dark chocolate at its best and boy was it good. The flat wooden spoon that was offered to me was kind of useless–I would have preferred a real spoon. But, the one given to me did double duty: it helped stir the chocolate as it thickened and also kept me from gulping down that little cup in one sip. I realized looking over my tag list that I didn’t have a single tag for chocolate–one of my great loves in this world. So, I dedicate this tag to you, my most dear (in all of your caffeinated glory) guilty pleasure.