I have flipped through Jim Lahey’s book, My Bread, at some half-dozen bookstores before I finally received a copy of it for Christmas (thanks to my brother and sister-in-law). The whole bread-making phenomenon seemed to have passed me by at its peak. When Mark Bittman published an article in the New York Times about the amazing No-Knead Bread, I was…appparently not listening. And not food blogging. So naturally, I went on living around the corner from my perfectly delicious bakery, which sells perfectly delicious bread for cash only.

Pictured Below: my first No-Knead Bread But then, Jim Lahey’s book came out and everyone seemed to be buzzing about his bread again. And his pizzas. I supposed that it was time to find out what all of the fuss was about. I’m not one to shy away from kitchen experiments, and this bread seemed almost…too easy. My first try was the very basic No-Knead bread from Jim’s book–the very first recipe. I left the dough to rise overnight and baked it late in the morning. Oh, hello there sunshine. The bread, which looked–incredibly like bread is supposed to look like coming fresh out of the oven–sang a tune of sweet crackles as it sat on my dining table cooling. Its crust was as promised–hearty and rich. The center was tender and springy. And the smell? Oh, it felt like I was standing in line outside the bakery–only inside of my city apartment.

This bread lasted 2 days. 2 days for two people. I am sure you can do the math.

Well, next came the dulce de leche. But I digress. Next came my second experiment with Jim Lahey’s bread. This time, I was going to try his Pane Integrale–integrated bread, so to speak. this bread is still made with a large amount of bread flour, but with some whole wheat flour mixed in. I had on hand some white whole wheat flour and crossed my fingers that it would work just as well. And work it did. While my loaf didn’t come out as nicely rounded, it certainly didn’t miss anywhere else. The crust was just as…crusty and the center, while just slightly denser that the original, was just how I liked it.

Remember that dulce de leche I told you about earlier this week? Well, this is the best thing you could slather it on. And you know how tomorrow is Saturday and you probably have a carton of eggs in your fridge? Well, I’ve got the perfect Saturday morning breakfast idea for you: egg in a homemade bread hole. Oh, it IS that good. 1. Combine the flours, yeast and salt in a medium bowl. Pour in the water and use your hands to mix the ingredients until you have a very wet, very sticky dough (about 30 seconds).
2. Cover the bowl with plastic wrap and let the bowl sit at room temperature, in a draft-free spot for 12-18 hours (until the dough is more than doubled and is covered with bubbles).
3. Dust a work surface with flour and scrape the dough out of the bowl with a spatula. Flour your hands a bit and fold the edges of the dough towards each other just a few times (until the dough is round).
4. Dust a tea towl with cornmeal and place the dough gently inside. Wrap the towl loosely around the dough (make sure the edges are free at the top, allowing the dough to expand inside). Let rise for another 1-2 hours at room temperature. You’ll know the dough is ready if you poke your finger in the dough and it does not spring back.
5. Preheat the oven to 475 degrees F and place the dutch oven (with the lid on) inside the oven for about 30 minutes, as the oven preheats.
6. Carefully take the pot out of the oven. Unfold the tea towl and nudge the dough into the pot, seam side up. Cover the pot and bake for 30 minutes.
7. After 30 minutes, remove the lid from the pot and continue baking for 15- 30 minutes more (until the crust is nicely browned–but not blackened–and some cracks develop at the top).
8. Remove from the oven and carefully take the bread out of the pot and place on a cooling rack. Wait to eat until cooled (this will allow the inside to firm up). 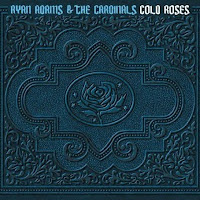 Cold Roses was the first of three albums released by Ryan Adams in 2005, and signaled a return to top form for gentleman Adams. Cold Roses has sold only about half the number of copies as Adams’ more popular albums such as Gold and Heartbreaker. Nonetheless, it is probably as good as either of those albums, but was often overlooked by casual fans. Of course this was most likely due to the high quantity of material that prolific songwriter released between 2003-2005 – not to mention the fact that many of those albums contained as many moments of brilliance as they contained disappointments. Indeed, this isn’t an album to overlook. It was recorded with the Cardinals (who also backed Adams on his second album from 2005: Jacksonville City Nights) at Loho Studios in New York City, and is warm, relaxed and country inspired. For these reasons, it is the perfect pairing for the easy-to-prepare, warm, flavorful pane integrale featured today on eating/sf. This is a fantastic recipe, and it probably goes without saying, but homemade bread is always worth the effort. Likewise, Cold Roses, which features Adams at the top of his game and embracing his strengths as a songwriter and vocalist, is an album not to be missed. To read more, head to Musical Pairings. –Matthew

Caramelized Fennel Fettuccine with a Poached Egg + Eat In