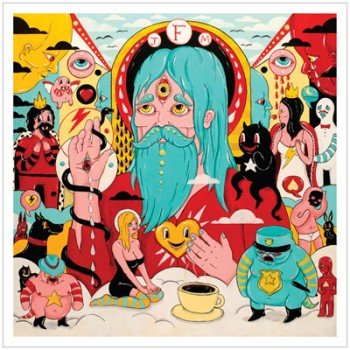 Even in an industry that isn’t known for convention, J. Tillman’s career as a musician is pretty unorthodox. His career initially sprouted in 2004 when his first tape found its way to songwriter Damien Jurado. Jurado, impressed by what he heard, invited Tillman to join him on tour. Since that time Tillman developed a loyal following after releasing a discography that included seven full length records and three EPs. Then, in 2008, Tillman joined the critically acclaimed indie-folk band Fleet Foxes as a drummer. For a professional musician, things looked pretty good for J. Tillman: he’d earned a following as a solo songwriter and was simultaneously a member of an increasingly well-loved and influential indie-rock band. So it was unexpected when Tillman abruptly announced that he was leaving Fleet Foxes and would henceforth release his solo music under the new moniker Father John Misty stating: “Back into the gaping maw of obscurity I go.”

Today, we’re honored to be featured on the website of Aida Mollenkamp of Ask Aida (Foodnetwork) and foodCrafters (Cooking Channel). The rest of today’s Musical Pairing is being featured on her site, and you can read it here: http://www.aidamollenkamp.com/2012/03/turntable-kitchen-guest-post-music-pairing/

Fear Fun, scheduled for a May 1 release, is available for pre-order from Sub Pop.