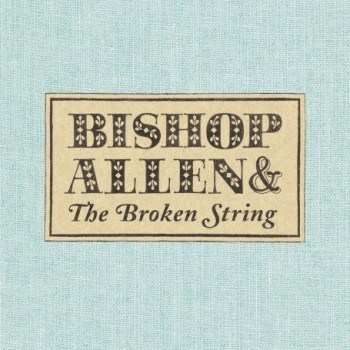 I’ll be honest, I overlooked Bishop Allen & The Broken String when it was originally released in 2007.  It’s not that I hadn’t heard the band yet, or that I didn’t like them. To the contrary, the year before its release, the band had released an EP a month for twelve consecutive months, and I had purchased and thoroughly enjoyed each of those EPs. I played tracks like “Vain” and “Corazon” on near repeat for months on end.  Instead, due to the quantity of the bands output the year before, I had suffered Bishop Allen-overload so that when the album was released shortly thereafter, predominantly featuring tracks from the EPs, I just kinda shrugged. It didn’t help that a lot of the album reviews I read were middling or average — a fact, which now that I’m giving the album a fresh listen today, I attribute to the fact that many of those critics were probably also suffering from Bishop Allen overdose.  It may have been too much of a good thing.

But now that I’m finally giving the album a listen several years later, I am convinced that what the fellas behind Bishop Allen were doing was just that: a good thing; some very good things in fact. Bishop Allen & The Broken String compiles a dozen crisp, clean, upbeat and refined indie-pop gems that can brighten even the nicest summer day. And because they were able to select the best tracks from the dozen EPs they had released the year before, the album contains absolutely no filler or flops.  The album opener, “The Monitor,” had originally appeared on their March EP, and had been an early favorite for me.  The version that appears here is reworked so that it warms to a slow simmer that steadily bubbles to an eventual boil with bright, glistening piano, sharp acoustic guitar and taut, symphonic percussion before it is seamlessly blended into the clattering and exuberant, Paul Simon-esque “Rain.”  Simon, by the way, is clearly one of the band’s starting points, but so are groups like the Kinks, the Magnetic Fields, and the Zombies.  And little bits of all these influences can be heard in the beautifully cinematic and gloriously carefree groove of “Click, Click, Click, Click.”  The album is a true, feel-good sonic stew that is composed of not just diverse influences, but also unusual instrumental arrangements that includes ukelele, saxophone, piano, acoustic guitar, oboe, banjo, and just about any other instrument they could get their hands on.  For those reasons, we’ve lovingly paired it with the Minted Zuccini, Pea and Lemon Cucumber Salad that Kasey is featuring today in the Kitchen.  The recipe is crisp, refreshing and a great summer salad that is composed of several high-quality, diverse ingredients.  In fact, the salad’s got it all: Humboldt Fog cheese, English peas, mint, cucumber, thinly-sliced zucchini, and crumbled hazelnuts.  Like the album, this recipe is a feel-good hit. 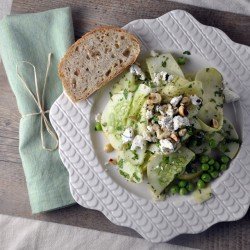