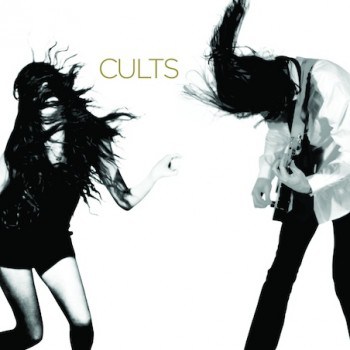 [And we’re back.]  Sometimes patience pays off… and then sometimes it doesn’t.  That is especially true in the treacherous and ever-shifting modern world of independent music.  I could rattle off a list of bands who released amazing introductory singles only to later release disappointing debut albums – but I won’t – I tend to demonstrate my dislike for an album through silence (i.e. I just don’t write about it).  Like any impatient fan, I look for signs of what to expect from a band’s future releases.  And when that debut is a long time coming I start to worry that it may be a sign that they are struggling with the recording process.  The NYC-based duo Cults made a pretty dramatic debut on the indie music loving world back in early March of last year when they released the MP3s for the “Go Outside” single.  That was one year and 3 months ago, which is an extremely long time in the indie-music world.  So, yeah, I was worried that they were struggling with their debut album.

So, with all of that said, I am extremely pleased to say that Cults’ debut is every bit as good as I had hoped it would be.  In part, the record is a hit because they didn’t mess with the music that brought them attention in the first place.  In fact, many of the tracks here won’t be new to long time fans.  Both “Most Wanted” and “Go Outside” from their early single are still here, but with a more dynamic sonic presence.  Notably, the grimy, haunted-house keyboards and crisp, grooving rhythm section have been drawn forth to greater prominence in the mix.  Thankfully, the new mix doesn’t dramatically change the overall effect of the tracks, but it does better balance those darker elements of their arrangements against the dreamy melodies of their song-writing and the child-like innocence of singer Madeline Follin’s vocals.  Similarly “Oh My God” which was originally released for Adult Swim’s singles series has been given an effective, non-invasive sonic face-lift.  Other tracks on the album we’d heard as early as July of last year when they road-tested some of the material on a short tour (including a gig in July of 2010 at San Francisco’s Bottom of the Hill).  They sounded good then, and they sound great now.  So with three of the tracks released over a year ago and others well road-worn by the time they were released, we kinda knew what to expect from the album.  And that doesn’t even take into account the fact that “Abducted” and “You Know What I Mean” were both released recently as excellent carefully placed teasers for the album.  I’m not suggesting that you’d want to ignore this one if you’ve already fully-digested those prior releases. To the contrary: there is a lot of good new material here that you haven’t heard even if you’d hungrily devoured every morsel they’ve previously released.  A couple of other highlights include the glockenspiel-spined melodies on “Never Saw The Point” and the sneaky, playful tune on “Bad Things.”  And as I indicated above, the album contains the most definitive versions of their prior tracks.  It’s definitely an album I can recommend.

And if you are looking for a tasty meal to accompany your music-ingestion, I’d highly recommend the similarly fresh and clean-tasting Cilantro Chicken Skewers with Mango Salsa recipe Kasey is featuring in the Kitchen.  Aside from my love for food served on a stick (with which you can rarely go wrong), the mango salsa balances beautifully against the grilled chicken.

Cults – You Know What I Mean

Go get Kasey’s recipe for cilantro chicken skewers with mango salsa.  Then go and purchase Cults self-titled debut from Insound.  Mix well, bake at 350 and serve warm with a cocktail of your choice. 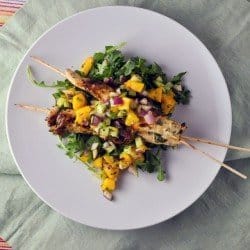 A Matter of Consecutive Moments