It’s only been a few weeks since Thanksgiving, and already it’s Christmas-time, and New Year’s is just around the corner. Hard to believe how quickly these times fly, and already I miss turkey. This sauteed turkey recipe, with a sage-brussels sprouts topper, is really the perfect way to relive Thanksgiving (if you’re into that sort of thing). It’s from the latest issue of Bon Appetit, which I am supposed to start receiving in my mailbox now that Gourmet has gone under (tear!)

It’s the sort of dish you could whip up in 15 minutes after a long day at work, and feel like you’re eating something that took much longer to pull together at a restaurant. The dried cranberries, which soften as they cook, add a nice sweetness (and that Thanksgiving touch) to the brussels sprouts, which turn tender and buttery, yet hold up a nice crunch at you bite into them.

I’ve been hard-pressed in the past to find a lot of recipes for turkey cutlets–not sure why, but everything I’ve ever come across has always felt so boring (or felt like a diet recipe). I find that aside from Thanksgiving, turkey just does not get a lot of love at the dinner table. And I’m on a mission to change that. Besides being healthy, turkey is pretty flavorful, and can be prepared in a number of ways (from roasted to sauteed, and ground up into meatballs for soup, pasta and chilli). So the next time you’re thinking of a making a healthy, fast and flavorful meal for yourself and/or your family, give this one a try. It doubles and triples easily. 1. Season the cutlets with salt and pepper and dredge lightly in the flour.
2. Heat 2 tablespoons of olive oil in a cast iron skillet over medium-high heat and add the cutlets, cooking for about 3-4 minutes on each side (until browned). Transfer to plate and tent with foil to keep warm.
3. Add the rest of the olive oil to the skillet and stir in the shallot, letting it brown lightly (about 1 minute).
4. Add the sprouts, chicken broth, cranberries, and chopped sage. Cover and cook for about 5-6 minutes, letting the brussels sprouts begin to brown and crisp.
5. Stir in the vinegar, then the butter. Season with salt and pepper, to taste.
6. To serve, place 1 cutlet on a plate and top with the brussels sprouts. 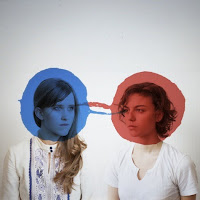 Eating/sf is featuring a recipe today for turkey cutlets with brussels sprouts and dried cranberries. It is a savory dish with hints of sweetness courtesy of the dried cranberries. Kasey describes it as a recipe you might want to check out if you are missing Thanksgiving already. So with the concept of “missing things” in mind, today I’m posting my review of Dirty Projectors‘ Bitte Orca. It is an album that I just never found the right pairing for, but which I found to be one of the year’s best releases: it just barely didn’t make my Top Ten of 2009. Featuring deep and thumping percussion, guitar riffs that alternate between shimmering and off-kilter and roaring, and co-ed vocals that call to mind the Talking Heads and Bjork, Bitte Orca is a captivating and engaging album that rewards repeated listens. Check out Musical Pairings–at its new URL (www.musicalpairings.com) to read more. –Matthew