My Favorite Dish: Chanterelles and Potatoes - Turntable Kitchen
Log In or Register
0 Items

I haven’t specifically been waiting to post this recipe for a while, but it so happens that I’m only getting around to it now. These sauteed chanterelle mushrooms and potatoes are something that my mom has been making for years–as far as I can remember, in fact. When I was little, we’d pick our mushrooms straight from the forest outside of Moscow. Sometimes, we’d eat them plainly cooked by themselves. But this, this was my special treat. Buttery browned potatoes, golden onions, and of course, tender orange-hued chanterelles.

My mom makes this dish using larger potatoes, slicing them thinly in the raw, and sweating them out with the onions. This method takes slightly longer, but creates the most perfectly crisped potatoes. Tonight, we had on our hands some small fingerling potatoes, so we decided to halve them, and brown them without crisping them to much (this variety of potato is super creamy and creates a nice accompaniment for the chanterelles). Here in Northern California, you can often see people pulling off to the side of the road, wandering into the woods to hunt for mushrooms. Chanterelles can be found around Pt.Reyes and Mendocino, and this is exactly the time of year that they’re abundant (though no less expensive–they’re about $15/pound at the farmer’s market). Ironically, these mushrooms were not considered a luxury when I was growing up–readily available in forests throughout the countryside. This dish is as homey as it gets for me. 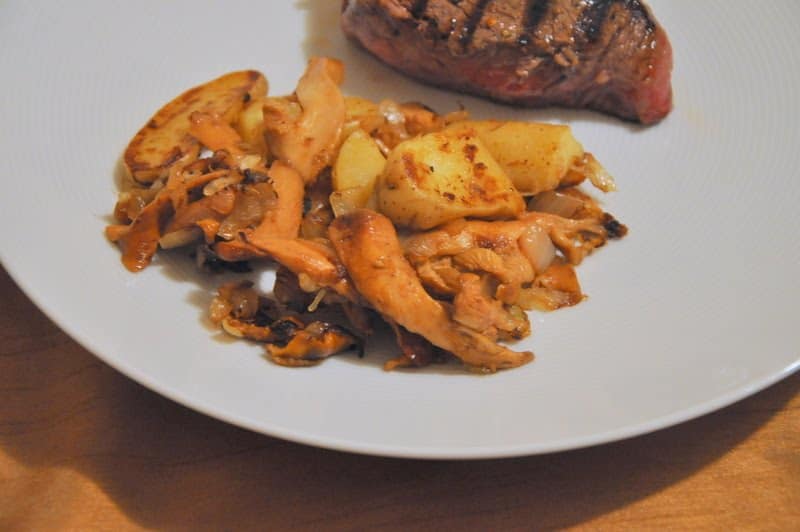 While I know now how precious these mushrooms are, this recipe is the mac and cheese of my childhood. It is what I think of when I smell pine trees and chimneys burning. When I pull off my hat and my gloves (we wear those in California, too, for those who didn’t think it possible), crash into the couch and bundle myself in a layer of blankets, I want to curl up with a steaming bowl of these potatoes and mushrooms.

We bought our first Christmas tree today, after playing kickball with friends for a friend’s birthday in the chill. The rain held out, and despite the cold, we walked our little bush/tree home eight blocks and arranged it atop some boxes, which we’ve yet to cover with a sheet. This will be my first holiday season as a married woman, and making this dish for dinner (to accompany a nice grilled steak) seemed like the appropriate way to kick off the season.

1. If you are using small potatoes, boil them briefly first, until they can be pierced with a fork, but are not falling apart. Cut them in half.
2. Add 2-3 tablespoons of olive oil to a large skillet, and heat over medium-high heat. Add the onions, and saute for about 5 minutes, until they soften.
3. Add the potatoes, season with salt and pepper and cook over medium-high heat until they just begin to brown at the edges.
4. Next, add in the chopped chanterelles, add additional salt and pepper, to taste, as well as the butter. Use a large wooden spoon to mix up and turn the potatoes over, letting them brown on the cut side. Dial down the heat to medium.
5. Continue cooking for 8-12 minutes, until all of the moisture is evaporated, the potatoes are nicely browned, and mushrooms are fully cooked.
4. Serve as a main course, alongside sliced meats and cheeses, or as a side to grilled meats (preferably steak).

* you can also make this recipe using large potatoes. Peel them and thinly slice them (no need to boil first), and cook them with the onion in a covered skillet, sweating them out and then browning while occasionally stirring. 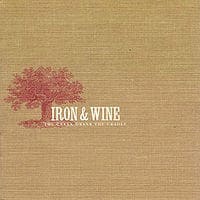 Today’s recipe is an adaptation of one of Kasey’s mom’s recipes. Earthy, forest-y sauteed chanterelle mushrooms are added to sauteed onions and lightly crisped fingerling potatoes. It is simple, but delicious and hearty. Similarly, Iron & Wine’s 2002 debut album, The Creek Drank The Cradle, is earthy and musically simple. The album is written, recorded and performed entirely by Sam Beam. Musically, it features nothing more than Beam’s soft, woodsy vocals; his gentle acoustic guitar strumming; and the occasional slide guitar or banjo plucking. It is intimate, emotionally evocative and hands down one of the top debut albums of the entire decade. To continue reading, and sample some tracks, head over to Musical Pairings @ eating/sf. –Matthew