Brussels Sprouts and Bacon: And Another - Turntable Kitchen
Log In or Register
0 Items Brussels sprouts must be hot these days. I’m seeing recipes galore. Megan from A Sweet Spoonful wrote about them yesterday. Eat Make Read and Pithy and Cleaver try their takes on David Chang’s twist. Mark Bittman gives us bacon and figs + brussels sprouts. Kalyn from Kalyn’s Kitchen has roasted them and tossed them with pecans and gorgonzola. Can I venture to say that brussels sprouts are ‘in’? I only recently discovered them–a few years ago. Until then, I had only heard horror stories about boiled, bitter, limp messes.

I never had to eat brussels sprouts as a child, and my mother fits into the group of people that absolutely hates them. But I kept seeing them. Everywhere. With steak and fish. Roasted and sauteed. They looked so… intriguing. And so I gave them a try, and been trying them ever since.

In my humble opinion, brussels sprouts are quite the underrated vegetable. They’re easy to prepare, nutritious, and they really pair well with smoky, spicy and tangy flavors in all of the right ways. Of late, I’ve been been slicing them very thinly and sauteing them up with all sorts of flavors. Last week, I tried them with some coppa I had left over from a homemade pizza night. They accompanied some floured, pan-fried tilapia and they were a HIT! So much so, that I craved the same dish this week, so I remade them. This time, though, I paired them with bacon, Parmesan cheese, and just a hint of lemon.

The end result? The sprouts themselves were slightly buttery, tangy and smoky from the bits of bacon I added in. I made them, again, with the pan fried tilapia, and again, they were a hit. If you’re looking for some healthy Thanksgiving side dish ideas, this really is a winner (and you might be able to convince the naysayers to give these sprouts a chance again). Have I mentioned I’m already in Thanksgiving mode? Stay tuned for more ideas…

1. In a small skillet, cook the bacon until it is crisp (don’t burn it–leave it just slightly undercooked). Place on paper towels to soak up the fat.
2. Pour the olive oil into a large skillet and bring to medium-high heat. Add the shredded brussels sprouts, sauteing them for about 4-5 minutes, stirring frequently. Season with salt and pepper.
3. Cut the bacon into bite sized bits, and add them to the pan. Squeeze some lemon juice into the pan and shred a bit of Parmesan, continuing to toss and saute.
4. Keep sauteing for another couple of minutes, until the sprouts begin to get just slightly golden in parts, and have had a chance to infuse the flavor of the bacon.
5. Place the hash into a bowl and grate some more Parmesan into it, tossing to combine. Adjust seasonings, to taste. Serve warm. 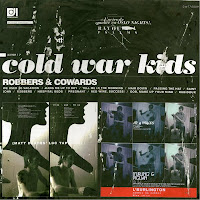 Brussels sprouts get a bum rap. This may be because when overcooked, they can develop a bad taste and odor. But when cooked properly (such as in Kasey’s recipe for today) brussels sprouts can be awesome. And if you are on the fence on this one, it is properly worth mentioning that today’s recipe includes bacon (and we already know everything tastes better with bacon). So maybe it is time to re-evaluate brussels sprouts. Today’s Musical Pairing is Los Angeles’ Cold War Kids, a band that (like brussels sprouts) also got a bum rap – at least from one prominent indie-music website (whose review of the CWK’s debut borders on defamation). So we’re going to set the record straight: Cold War Kids Robbers & Cowards offers a great blend of old-fashioned soul, blues and rock n’ roll that thumps, shakes and rattles in all of the right places. To read the more about the Cold War Kids’ Robbers & Cowards, head over to Musical Pairings. –Matthew