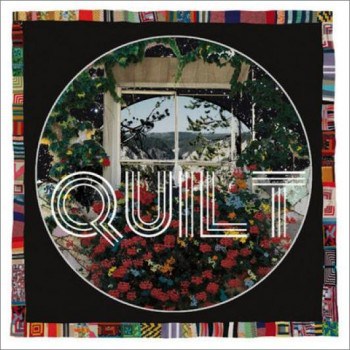 Stop me if you heard this one before. The story goes something like this: a trio of art school students bond over the discovery of their shared appreciation for experimental song structures, psychedelic music and good-old fashioned pop harmonies. Naturally, they form a band and subsequently tour the “underground” music scene on the east coast (literally “underground” – as in they play a lot of gigs in musky basements). They release a smattering of lo-fi material on cassette and 7″ single before eventually struggling to keep the band together as they face the pressure of balancing the demands of touring and recording against the duties of work, marriage and daily life. In the world of music, this isn’t a unique tale by any means. Still, although the story of Boston-based trio Quilt isn’t particularly unique or magical, something about their excellent Mexican Summer-released, self-titled debut album is far more captivating.

Quilt formed when Shane Butler, Anna Fox Rochinski and Taylor Mcvay met at School of the Museum of Fine Arts in Boston. Eventually, Mcvay left the band on amicable terms and was subsequently replaced by new drummer John Andrews. I used quotes earlier when referring to this self-titled release as their “debut” only because you can find some prior releases on the Internet if you try hard enough. Still, having done that research myself, it is hard to argue that this self-titled album is the perfect introduction to the band.

Their bio notes that Butler grew up in a “spiritual community with a lot of musical chanting” and Rochinski was “doing classical singing in choirs that had a lot of crazy harmonies.” Those experiences are readily apparent in the group’s music which often features three-part harmonies and virtually always features at least dual layered vocals to quietly intone each lyric. Butler’s background also explains the vague, but readily-apparent, spiritual aesthetic that permeates the length of the album. Balancing this against their wide-open, psychedelic ambiance and the stitched together, reverb-heavy instrumentation, Quilt produce a quasi-mystical psych-folk record flowing with shuffling rhythms and wind-swept soundscapes.

The album opener, “Young Gold,” creeps open with a steady and deliberate sway accompanied by a bright, technicolor glow that calls to mind a vividly colored 70’s film. It’s both cinematic and psychedelic. “Cowboys In The Void” burns with the bright, complexity of competing and layered, mantra-like harmonies and crisp, reverberating guitar riffs that waft smoke-like in the air.  Midway through, the track achieves full bloom with a chugging rhythm and the repetitive chanting of the lyrics “Left standing in the only void we know / No talking in the only void we know.”

In all, there is a certain timelessness to Quilt. It could have been a long lost 70’s underground classic, and yet it also sounds exactly like what you’d expect from a great Mexican Summer release from the year 2011. Still, although timeless, with the gentle, hushed vocals and feather-light melodies, the album strikes me as a good album for starting your day. It’s engaging and never confrontational. In other words, this is a great album to jam during breakfast/brunch. Which is why it is a great musical pairing for Kasey’s Sage Biscuit Egg Sandwich. That sandwich is buttery, fluffy and “OMG” good. Seriously, depending on your relationship with your food, it’s nearly a mystical experience itself.

So drop the needle on Quilt’s debut to get those grooves rolling, and then get your breakfast on. You’ll be glad you did.

Quilt – Cowboys In The Void by Mexican Summer

Head to the Kitchen to read the recipe for Kasey’s Sage Biscuit Egg Sandwich.  Then head to Insound to buy this slab of psychedelic groove on vinyl. 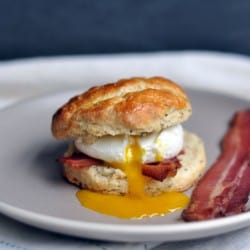