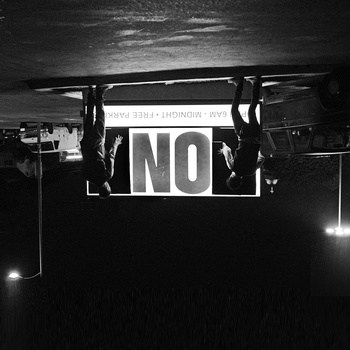 Echo Park-based NO will find themselves compared to The National. It’s to be expected: there are some obvious similarities that can’t be entirely unintentional. After all, frontman Bradley Hanan Carter has a woody, Berninger-esque baritone and, like Berninger, he often relies on careful phrasing in lieu of a wide vocal range. But don’t misread this, the similarities here strike me as inspiration and not imitation. Like any other band, NO has picked out stylistic elements from numerous influences (The National being the most obvious on the surface) to use in their own original compositions to create something new. Here, there are lush, choral harmonies that underline brooding, incrementally developed melodies built alongside punchy, driving rhythms.  And NO can (and do) casually step away from that carefully-phrased baritone for other devices, as they demonstrate on “There’s a Glow” and “Coming Down.” What can I say?  I’m sold.

NO – Stay With Me
NO – Another Life

You can download the EP for pay what you want from Bandcamp.