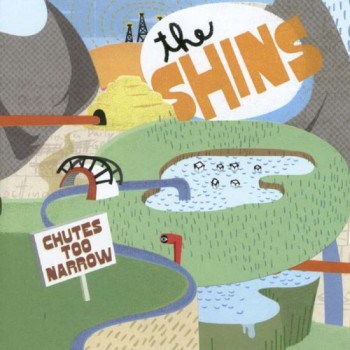 You may have heard of today’s Musical Pairing before: The Shins. They’ve been around for awhile now. But although they are pretty seasoned indie-rockers by this point, they’ve always reminded me of youth and new beginnings. Specifically, I associate them with my own “new beginnings” back when I first moved to San Francisco in the early naughts. I’d arrived in San Francisco with a suitcase full of clothes, a busted boombox with a dangling speaker, a backpack with my CD wallet and other random knick-knacks, an airplane blanket I’d stolen from the flight, and my pillow. The blanket came in handy because I had brought no other blankets, had no bed, and realized on my first night that we had no heat in my first apartment and, as I learned, it can get cold in San Francisco during the Summer. Only the boombox was more important than that small blanket in those first few days because, as we’ve pretty firmly established on this site, I’m addicted to music. In the evenings before bed, I’d go to my bare-walled bedroom and I’d blast my newest records, records like Oh, Inverted World, through that busted boombox. Laying on the floor wasn’t comfortable and the blanket was much too small to completely cover me, but I was much to excited to let a little physical discomfort ruin my mood.

Probably in part because Oh, Inverted World soundtracked that time for me, I was eagerly looking forward to the release of Chutes Too Narrow. And, it didn’t disappoint. I poured over every detail of the album in heavy doses. I am confident that there is a general consensus amongst people knowledgeable of such things that there are very, very few moments in indie-pop that are more perfect than the coda on “Saint Simon” which consists of those blissfully, feather-light la-la-la‘s as frontman James Mercer sings: “Mercy’s eyes are blue / when she places them in front of you / nothing really holds a candle to / the solemn warmth you feel inside of you.” In many ways, Chutes Too Narrow was a surprising move for The Shins. It was slightly less atmospheric than the lo-fi Oh, Inverted World, in part because the keyboards were provided less prominence and their guitars were, comparatively, let loose. The production is much cleaner than it’s predecessor, though that was to be expected considering their rising prominence in the indie music scene. But all of the changes were subtle, and they retained all of the qualities that were crucial to their appeal: Mercer’s poetic lyrics, catchy songwriting, bright, light-weight melodies, and thoughtful song structures. Chutes Too Narrow makes a perfect Musical Pairing for Kasey’s Broccoli Soup with Lemon and Ricotta.  The soup, like the album, is light, flavorful and easy to fall in love with.  Of course, it’s hard to go wrong with a creamy soup blended with fresh ricotta.

The Shins – So Says I

Head back to the Kitchen to read the recipe for Broccoli Soup with Lemon and Ricotta.  They head to Insound to buy Chutes Too Narrow on vinyl. 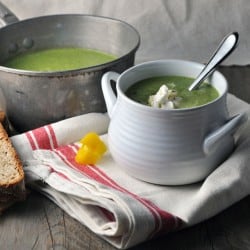