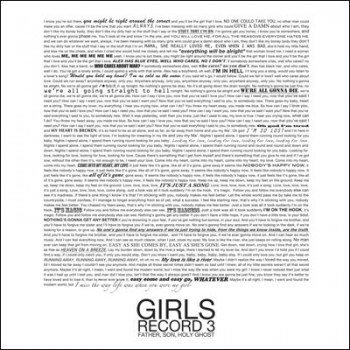 San Francisco’s Girls have a new LP scheduled for a September 13th release.  The first track released from that record is titled “Vomit” which sounds nothing like what you’d probably expect a song titled “Vomit” to sound like.  It is a melodically-shifting ballad with Pulp-esque harmonies, fuzz-covered guitar riffs and howling-pastoral organs.  It’s achingly beautiful and further evidence that the boys from Girls are more than capable of grand statements.  Girls’ frontman Christopher Owens called it a “personal triumph” and added that it was the beginning for him and only the 4th song he ever wrote.  Thanks to Gorilla vs. Bear who posted it up on their site first.

Update: Christopher Owens noted that the song title is in reference to Proverbs 26:11 which reads: “As a dog returns to its vomit, so a fool repeats his folly.”  I thought that was an interesting enough insight to merit an update.

Preorder Father, Son, Holy Ghost from Insound and get an exclusive poster.