Musical Pairings: The New Pornographers – Together - Turntable Kitchen
Log In or Register
0 Items

Musical Pairings: The New Pornographers – Together

It’s funny, but certain recipes just have their own personalities in my mind.  Tortilla soup, for example has a warm, laid-back, approachable, and “I’m fun at a party” type of vibe.  Of course, every tortilla soup recipe is different, but the tortilla soup recipe Kasey is featuring today in our Kitchen totally has that vibe.  It is delicious, satisfying, festive and informal.  So my choice for today’s pairing is The New Pornographers‘ latest LP, Together, which is equally lively, satiating and warming.

Together is the New Pornographers fifth, most recent and perhaps most aptly titled record.  Other records by the New Pornographers have more hooks (Twin Cinema); others have more introspection (Challengers); and others are more loosely energetic (Mass Romantic); but none have it all, uh, “together” quite the way Together does.  Which isn’t to say that Together is their best album to date, but it is an excellent group-effort by the Canadian super-group that accentuates all of things that have earned the band numerous, dedicated fans over the years.  There are A.C. Newman-penned, cinematic rockers with big power-pop guitar riffs and undeniable choruses lushly feathered with piano and string accents such as the infectious album-opener “Movers.”  Neko Case’s sexy, smokey and sultry croon is beautifully showcased on standouts such as “Crash Years” and “My Shepherd.”  Kathryn Calder is highlighted in a charming duet with Newman on “Sweet Talk, Sweet Talk.”  Destroyer’s Dan Bejar’s jangly-form of good-natured pop is featured on “Silver Jenny Dollar.”  And we have it all together on tracks like “Your Hands (Together).”  The album cover may feature people dancing in a snow storm, but make no mistake – this album sounds just like a celebration of the coming Spring.  Buy it from Insound.

Jump to the Kitchen to read Kasey’s recipe for tortilla soup.  Don’t forget to “heart” our songs on hypem if you like what you hear! 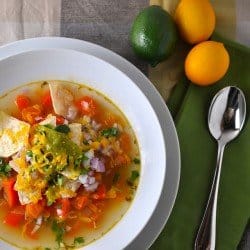