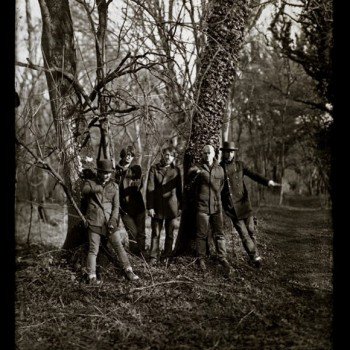 You wouldn’t know it from our musical pairings, but Radiohead is my favorite band. I’ve traveled far and wide to see them perform in Oxford, England; Toronto, Canada; and Cleveland, Ohio, in addition to “local” shows in Berkeley, San Francisco, Mountain View (Thom Yorke solo), and Oakland (Atoms for Peace). For my money, there is no better live show.  And for that matter, there is no better band recording music today. And since this is a food and music blog I should mention that I think their albums make great dinner party music too. One of the most memorable dinner parties I’ve attended was in a warehouse-like space listening to Kid A. So if you are keeping track, it may seem strange that I’ve only reviewed one Radiohead album on this site (In Rainbows). The truth is that I’m a little scared of pairing their records. It’s hard to explain, but the best way I can describe it is like this: when I see a band list Radiohead as one of their influences, I think “yeah, no shit.  you and a billion other bands across the world.”  And when I hear someone compare a band to Radiohead, I think “yeah right” and then go out of my way to ignore the shit out of that band. I mean, Miley Cyrus says she is inspired by Radiohead. So being inspired by Radiohead tells you nothing about a band, and saying a band sounds like them just sets expectations that probably cannot be met.  The only time I’ve really been intrigued by an artist citing Radiohead as an influence was when Kanye West said that he was inspired by Thom Yorke’s Eraser, and then it was simply because it felt so out of left field.  I guess what I’m saying is that maybe I take Radiohead a little too seriously, and maybe I just need to lighten up, but if I do a pairing – I want to make sure I’m really happy with it.

So the new album is out.  I am going to lighten up and write a review.  In fact, I am going to update this very post with a proper review.  But at the moment, I’m still digesting it and giving it a few listens.

Update2: Still listening to the album pretty much on repeat.  Presently with headphones on and the volume cranked way up.  Pretty much loving every track on here.  It is even more inner-facing and plaintive than their prior albums.  At first I was a little disappointed that it wasn’t more like In Rainbows, but as one of our readers (Brian) commented, Radiohead “force you to realize that going backwards is never as rewarding as moving forward.”  It’s a realization I have each time I listen to a Radiohead album, but manage to forget with each new record.  It is definitely true here.  Radiohead moved forward, and the results are very satisfying.  Here are a few of my thoughts on specific tracks:

Bloom:  The album opener is swirling, sparkling, stuttering and decadently textured.  The ambiance is dense – in a very welcome way for anyone who likes a soundscape with heavy grit.  Selway’s drumming, likely manipulated through some significant digital processing (though maybe not as much as a first impression suggests), is still masterful.  Colin’s bassline is pretty notable too.  Best of all the track as a whole is addictively intriguing.  To quote Flying Lotus: “OH MAN that ‘Bloom’ Shit was too fucking real. LAB FACE.”

Morning Mr. Magpie: I like how this track bursts open at a fiery pace with Greenwood’s repetitive guitar-funk and that sick, clattering rhythm from Selway.  The way Yorke’s ghostly howls on the breadown overlap his spastic, breathy “no no no no no”s is not a new trick for the band, but man they still get me in the gut.  Again, the ambiance is notable here: a ringing sort of dissonance that just hovers in the background adding an alarming uneasiness to the track’s overall mood.

Little By Little: Ticks, tocks, and lots of clatter and clank.  Here the crew whip up a controlled clutter of sonic curiosities that sound sorta like they’ve dug up the best jems from a sonic junkyard – reversed sound snippets, middle eastern melodies, and a tense clip/clop rhythm. Aside from all of that, this is a Greenwood brothers track: a hunched and slinking bass line courtesy of Colin and a slowly reverbating guitar riff courtesy of Johnny really push this song forward.

Feral: I’ve been really loving heavy, dubbed out bass sounds recently, and it seems like Radiohead has been feeling the same way.  A hectic drum kit and punchy, organic bass make this tune just throb with energy and feel like it just might implode. This tune will definitely scratch that itch for something that sounds “different.”  Yorke’s vocals are identifiable as his own, but are otherwise completely distorted and indecipherable.  Just as the whole thing is about to collapse they blow the whole thing out with some deep bass that just evens everything out.

Lotus Flower:  This track is just mesmerizing.  Debased synths, bellowing bass, that faint digital swirling sound, more of Selway’s crisp beats, and the first track where York’e falsetto, which is frequently echoed and stretched at it’s ends here, is the star of the show.  The track also features my favorite lyrics on the album so far: “Slowly we unfurl / As lotus flowers / Cause all I want is the moon upon a stick /Dancing around the pit / Just to see what it is / I can’t kick the habit / Just to feed your fast ballooning head /Listen to your heart.”  This will become a new favorite for many Radiohead fans. It’s already become a new favorite of mine.

Codex: Despite the disorienting vocal snippet that opens the tune, this is the most straight-forward track on the album.  A haunting piano melody, a slow but steady pulse and Yorke’s distant and ghostly croon before the lyrics enter the picture.  The track ends with high-pitched chirping and static-filled noise before rolling into the next song.

Give Up The Ghost: Maybe the album’s prettiest moment, and again, another relatively straight-forward track (for Radiohead that is).  The heart and soul of the tune are simple Thom’s voice and an acoustic guitar.  Increasingly splintered, reverbed, and echoed dubbed vocals snippets flesh things out.  Despite all of the electronic-flourishes, there is a sense that at it’s heart the song was inspired by the work of Neil Young.  Another personal favorite.

Separator: Clearly another highlight and a moderate in the world of Radiohead politics, this track will likely appeal to both camps of Radiohead fans: those who want them to be more conservative and those who want them to be more progressive.  It features a very jazz-infused rhythm section, popping electronics, distorted vocal dubs, and glisteningly sweet guitar as Yorke sings: “If you think this is over then you’re wrong.”

A few other thoughts: Like pretty much every Radiohead album since OK Computer, The King of Limbs will prove divisive for fans because, without question, Yorke and Co. have moved pretty far to the left of traditional notions of rock n roll, filling the void with jazz and heavy doses of ambiant, dub and other forms of electronica.  I’ve seen a number of complaints that suggest Johnny was severely underutilized on The King of Limbs. That isn’t true.  First, great guitar-work doesn’t equate to shredding and big guitar anthems.  Like with cooking or any other form of art, being great also means knowing when to keep things simple. Second, although it is true that Johnny Greenwood is arguably one of the world’s best contemporary guitarists, by every indication he contributes way more to Radiohead than a few guitar licks.  He is also an extremely talented composer, and the songs are very clearly composed and meticulously arranged.  As ill_legible stated in a conversation we had on Twitter about the album, many of the songs are constantly “shifting between major and minor [with] sinister ambivalence”, not that unlike Greenwood’s work for the score of the film And There Will Be Blood.  So, in fact, I suspect that The King of Limbs sounds the way it does every bit as much because of the contributions of Johnny Greenwood as those of Thom Yorke.

You can officially download it from The King of Limbs website.  I’d love to hear your thoughts and impressions.