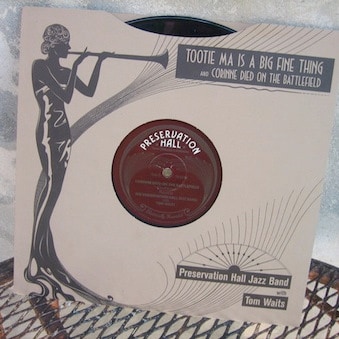 Waaaaay back in the year 2009, Mr. Tom Waits traveled down to New Orleans to record a couple of tracks with the The Preservation Hall Band for a limited edition (only 504 copies) 78rpm record covering “Tootie Ma Was A Big Fine Thing” , and “Corrine Died On The Battlefield”.  Waits’ website noted that these tracks were “[o]riginally recorded by Danny Barker in 1947, these two selections are the earliest known recorded examples of Mardi Gras Indian chants.”