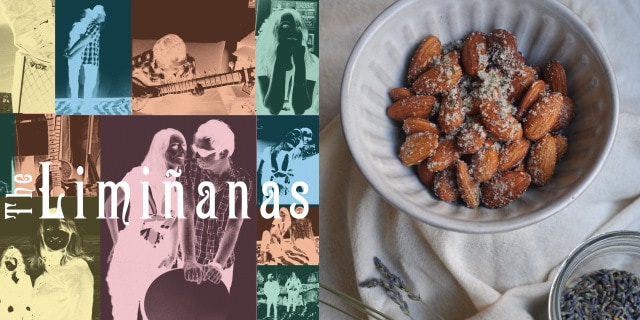 The lavender almonds that Kasey is featuring today on eating/sf are floral, flavorful and refreshingly unique.  They make me think of a light pre-dinner snack you might enjoy at an idyllic, rustic bistro found after a long drive into the countryside of Southern France.  For this reason, I believe this recipe pairs well with the band selected for today’s pairing: The Limiñanas.  The Limiñanas are a French band originating from Perpignan, France that cook up a sonically sexy stew of 1960’s Franco-cinematic scuzz-n-fuzz lined garage-rock.  As you listen to their self-titled debut, you’ll catch hints of surf rock, Serge Gainsbourg styled yé-yé, Stereolab, and the Velvet Underground all blended together in the disaffected croons and beatnik-vibed chords that the trio slink out of the melodies they’ve crafted for the albums’ dozen tracks.

Featuring cool, disaffected French vocals that are spoken as often as they are sung; seedy, rubbery bass lines that sound like they are up to no good (without appearing menacing); and go-go club inspired, hip-swaying rock ‘n roll rhythms enhanced by tambourines instead of hand-claps: it’s an undeniably French perspective on the surf and garage rock revival that has been steadily teased out of the American indie-scene in recent months.  That change in perspective combined with talented songwriting and solid musicianship makes the Limiñanas debut both refreshing and enjoyable — perfect for repeated listens. The album is officially released today, so go buy a cut of Limiñanas vinyl over at Insound.

Head back to the Kitchen to read the recipe for Kasey’s lavender almonds.

Single Serving: Memoryhouse – When You Sleep (My Bloody Valentine Cover)