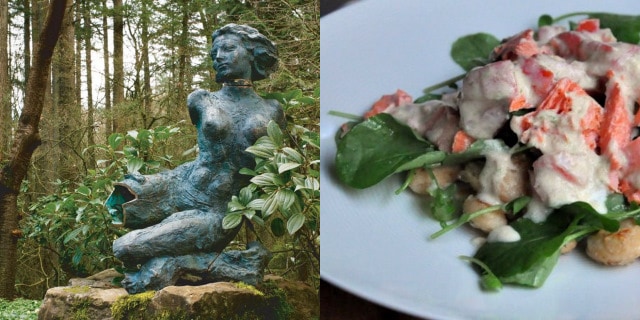 When I tried the delicious poached salmon salad with horseradish dressing that Kasey is featuring today, I knew this recipe had to pair with a band from the Pacific Northwest. This salad is fresh, it is big, and it is bold.  And all of those adjectives apply equally to the 4th LP from Portland-based trio Menomena: Mines.   But then, Mines is an album that can be described with a string of superlatives and adjectives that imply intricacy and largeness in scale — beautiful, vast, dense, complex and grand — for example.  Nonetheless, although each of those descriptors are spot-on, they also don’t bring you any closer to understanding what the album sounds like or why Mines is one of the year’s best albums.  But yes, let’s put that out there from the beginning: Mines is one of 2010’s best albums.

Menomena’s unique songwriting process has proven to be one of the most distinctive and defining elements of their music to date.  So, in describing what the album sounds like, it is useful to understand how the songs — and most of the songs from Menomena’s other albums for that matter — were constructed.  First, Menomena record their songs in a democratic process — put another way: there is no primary songwriter.  Also, there is no true “lead singer,” there is no “lead guitar,” etc., so each of the band’s three members alternate singing duties, instrumentation, and songwriting.  All of their songs are developed using a computer program that was programmed by band member Brent Knopf.  From there (according to band member Danny Seim), they usually set the tempo of the click track, lay down an improvised riff (usually beginning with drums), loop said riff, and then build upon the track with whatever noisemakers are handy.  Further, Mines specifically was recorded piecemeal via e-mail, and according to Knopf — there was never an occasion when the trio were together in one room during the recording process.  So, with that process in mind, you’d probably expect each of these tracks to incorporate a little chaos — and indeed they do.  But you might also expect the songwriting to suffer, and in that, you’d be wrong.  Instead, the songwriting here is explosive, elegant and wonderfully unpredictable.  Melodies often begin simply – a guitar and a down tempo drum beat on album opener “Queen Black Acid” for example – but unfurl slowly with additional depth being carefully, precisely, layered onto the mix in the form of snarling electric guitars, shimmering bells, bright bass lines, and more.  The album is phenomenally mixed which means that no matter how deep the layers of a given melody, the song never sounds muddied, the soundscape is spacious and broad, and individual elements have room to breath and shine on their own.  As a result, you can listen to the album over and over again, each time focusing on different elements and happily discover additional nuance.  If you couldn’t tell, let it be known now, I think very highly of this album.  You might want to buy a copy from Insound.

Head back to the Kitchen to read the recipe for that tantalizing poached salmon salad with horseradish dressing.