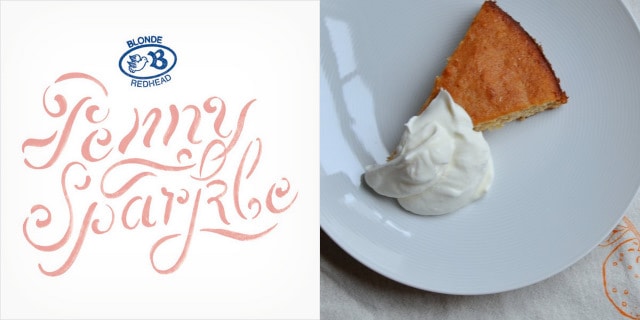 Kasey recently prepared the recipe featured today on eating/sf – a brown sugar cake – to welcome some guests visiting from NYC.  And as far as I could tell from the quickly empty, crumb-less plate that remained where the cake once stood: it proved to be very popular.  And if you get an opportunity to try this cake, you’ll see why.  It features subtle, but layered flavors that can be described as gently earthy-sweet.  In other words, it is not a sugar bomb – instead it is slicker and sexier.  And for that reason, it pairs well with Blonde Redhead‘s recent output: a band that has increasingly demonstrated that they know a thing or two about crafting layered, subtle sexiness.  Indeed, their latest album, Penny Sparkle, is an album that whispers seductively in your ear.  It is a sultry indie electro-pop album drenched in smooth atmospheric textures and clean, loosely draped melodies.

Blonde Redhead has been consistently rewarding throughout the length of their substantial career: a career that has been increasingly adventurous.  Their most recent output has demonstrated them fine-sanding away some of the angular edges that had defined their earlier “sound” and Penny Sparkle is the surprising, but logical, result of that evolution. Gone are the spindly guitars and crashing percussion of their late 90’s albums, and instead Penny Sparkle is defined by dubby rhythms, synth-heavy melodies and minimalist percussion.  Although it can be an alienating experience if you expected something different (like getting Massive Attack when you expected Sonic Youth); it is nonetheless a beautiful, intricate album that rewards an open-mind and repeated listens.  It is definitely recommended.  Buy it at Insound.

Head back to eating/sf to read the recipe for the Brown Sugar Cake featured on eating/sf.

Single Serving: Pretty Lights – Spilling Over Every Side