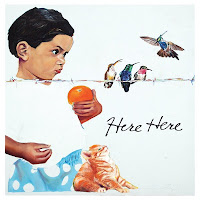 Here Here is a lush, seven piece chamber-pop band hailing from San Francisco. Their first EP, The Boy With an Orange, quickly demonstrates the band’s potential as future indie-rock superstars. The Boy With an Orange’s opening track, “5678,“ is a whimsical intro featuring playing children whose voices melt into an upbeat piano melody and lead singer Christian Lyon’s gentle, but majestic vocals on the second track, “You Sold Your Shadow.” A minute into this track, Lyon is met by a rich, warming violin as the song builds into a dramatic, swirling multi-instrumental composition. “You Sold Your Shadow” is an excellent opener, and manages to quickly and concisely highlight several of Here Here’s many strengths: full-bodied compositions, lush arrangements, and a lack of pretentiousness that is common in this genre of indie-rock. Indeed, on the very first full song on their EP, it becomes immediately evident that Here Here is one of San Francisco’s best kept secrets.

The next track, “Trainwreck,” opens with bluegrass-like banjo picking that flows into ornate, and richly textured indie-pop. One of the albums highlights, “Moving Up North,” is another example of orchestral, chamber-pop that bridges the gaps between bands like Beirut, Arcade Fire and Pinback, and features swirling acoustics, a soothing violin, and layered vocals. Lyon sings, “I’m going to find a new way out of here / it is slippery and sometimes I can’t see the road ahead of me.” And it is true: although Lyon wears his influences on his sleeve, it is clear that he has found a new way out. Here Here manages to capture the strengths of many of their contemporaries, but simultaneously avoids many of their failures such as kitsch, pretentiousness, and melodrama.

Download Here Here – Moving Up North from The Boy With an Orange. They are currently working on the follow-up to The Boy With an Orange which is tentatively scheduled for a release by the end of the summer. The album is expected to be preceded by a 7″ in June. I highly recommend picking up both.

Head back to eating-sf.com to read this local pairing with the paired restaurant review for San Francisco’s Zuni Cafe.