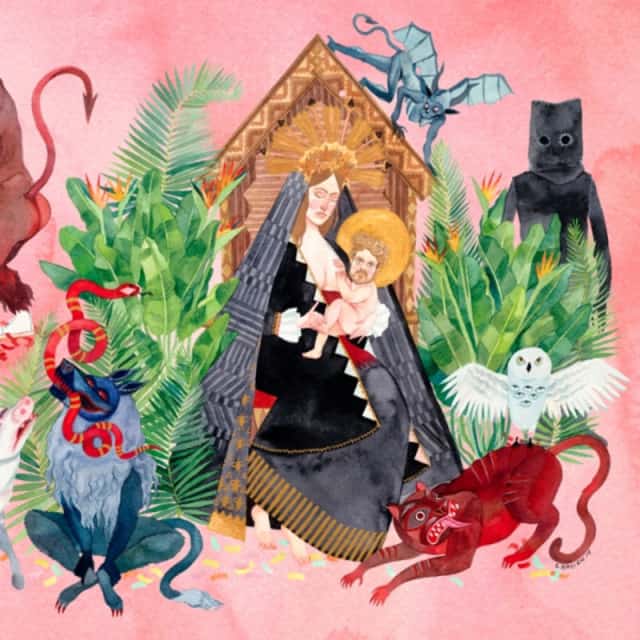 I really, really like Father John Misty (a.k.a. J Tillman). He puts on a hell of a great live show. And his “debut” under that name was simply fantastic. I played the crap out of that record when it first came out. But, to be entirely honest, the first single “Bored In The USA” from his new album I Love You, Honeybear didn’t resonate with me (the laugh track felt a little heavy handed).

But you know what? This new single “Chateau Lobby #4 (in C for Two Virgins)” more than makes up for it. It’s a grandiose jam with brassy horn blasts, Spanish acoustic guitar riffs, and a bouncing rhythm. And it’s real as hell: this is a glimpse into the man’s love life. In fact, the video to accompany it was recorded by Tillman and his wife during their wedding anniversary. Unfortunately, no kittens appear in the video. Read Tillman’s dubious explanation for the sadly feline-free vid below.

You can nab this on vinyl, CD or MP3 from Amazon. Tillman says of the video:

“A few months ago, I had an idea for a music video. I was going to rent a wedding chapel, get a dozen kittens and stage a kitten wedding, over which I would preside and intercut with performance footage of me lip-syncing the song which you’re hearing today, “Chateau Lobby #4 (in C for Two Virgins)”. Sounds great, right? It may have even gone viral because kittens. If a video goes viral, that means you’re reaching a wider audience, and you might even get on a chart. If you get on a chart that means you’re streaming more records, and the more records you’re streaming the more money you supposedly have for hiring kitten wranglers.

Aside from the fact that kitten wranglers are considerably more expensive than you may realize and that said-kitten wranglers all informed me there was no way we were going to be able get the outfits I had mocked up onto said-kittens, there was another extenuating factor involved in the decision to abort this music video concept and ruin the slim likelihood that I might ever get to see the Huffington Post entertainment headline “EX-FLEET FOXES DRUMMER WEDS CATS”.
That reason is that the song actually means a great a deal to me.

It’s got the #4 on it because this iteration Chateau Lobby was the 4th attempt at arranging and producing the song that did not turn out perversely sentimental. Sentimentality brutalizes emotion. Much like ironic music videos.
I don’t care all that much if you like the music video or not. The label isn’t crazy about it. Management isn’t crazy about it. I have been informed I’m basically kissing an MTV “Woodie” award goodbye forever. I made it on an iPad on my wedding anniversary with the one I love. We ate pancakes.