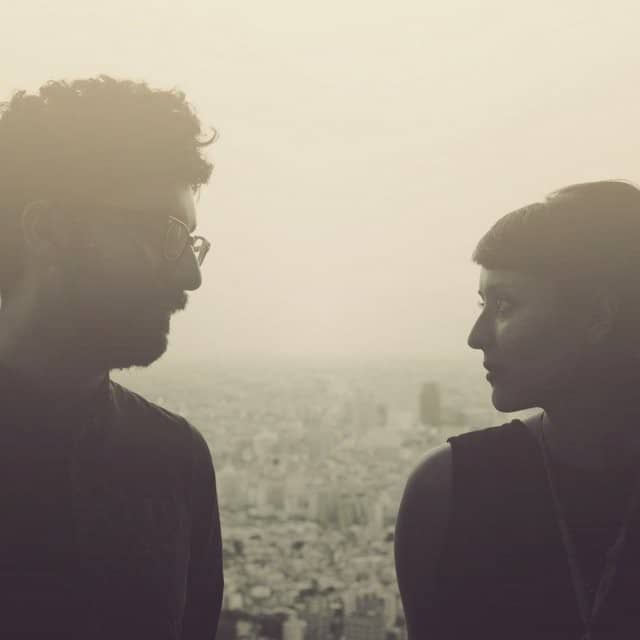 Last month, the ever-shifting and always-working Salt Cathedral put out their latest EP, OOM VELT, a collection of songs that at once restricts their palate and broadens their sound.

To celebrate the release, I chatted with founding member Nicolas Losada about his upbringing in Colombia, mixtapes and his experiences in Japan. This is an edited transcript of our chat.

How did you get your start in music?

“In my family, my dad is a big jazz fan. And I grew up in Colombia, so it’s kind of weird to have a dad that is very into jazz. I grew up with Miles Davis, [Charlie] Parker, John Coltrane, progressive rock—and I also grew up with a lot of Colombian music. In turn, that led me to go to music school for draft composition.

“Our singer, Juli, she’s also really influenced by Jazz—as is the drummer, Tommy. And, if I remember really well, Juli didn’t listen to music until she was 19; she was very into music, it just wasn’t a big part of her life until she fell in love with jazz. “

Your latest EP, OOM VELT, is your first to be guitarless. What inspired this shift?

“We used to be a five-piece band with two guitars, a bass and drums. And rehearsals here are difficult—it’s hard in New York to have a five-piece band. So, we keep it small by using a computer. The city, basically, made us change our writing process.”

“We’re gonna do a mixtape and we’re gonna do a full album, hopefully within the next year. We’re excited to do a mixtape because with what we do—this kind of pop and electronic music, whatever you wanna call it—there’s not a lot of mixtapes going on. I think it’s a really cool concept. Like, in the hip-hop world it’s really common; we wanna gravitate to that.”

And then, I assume, a tour?

“We’re doing a couple shows here in NY [now] and we’re signed to a European booking agency, so we’re gonna tour Europe in December. And then—we’re on a label in Japan, so we’re gonna have a tour there. We’re also gonna go to South America and play, and we’re working on setting up a U.S. tour that’s not yet confirmed.”

How’d you get hooked up with a Japanese label?

“Well it’s kind of strange. One of the owners of the label went to New York and he knew about us—from a blog or something. So he went to see us, liked it, and we met with him here in New York. The cool thing is that the label has three or four bands that are Japanese and we’re the only band that isn’t Japanese.”

“I think Japan. The hospitality there is really awesome—it’s really great. The food was amazing, the touring was amazing, the sound checks were incredible and the crowd was incredible—the gas stops have sushi; it was a perfect tour.

“I’ve toured the States two or three times, and it’s always incredible as well. But there are some things [about it] that every band is going to tell you: ‘There are like eight-hour drives where the only thing you’ll see is an IHOP or a Waffle House.’ And you’re like, ‘F**k this man, I hate that s**t.’ If America had better stops to eat, it would be the best—because the views are incredible here in the States. The only difference between the States and Japan is food.”

So is Japan also home to your favorite tour food?

“That’s really hard. When we’ve toured the States, we’ve tried barbecue from South Carolina, North Carolina, Tennessee and Austin, TX. So, every time we go on tour we have barbecue.

“When we went to Japan, we ate Ramen every day. And it was really cool because, for example, we had clam ramen and we were in the place where it originated. It was really special because it was next to the sea—they create the ramen there.”

Switching gears, how do you choose your album artwork?

“They come from this New York artist, Micci Cohan. We met her three or four years ago and fell in love with her art. It’s cool to have a relationship with an artist and continue to use their art with your albums. It becomes a collection.

“We normally go to her house and pick up some art, and we’re always looking for female characters. The obvious thing [connection] is that we have a female singer, but our music is really colorful and feminine: It’s energetic sometimes; it’s really dark sometimes. So I think the vinyl [art] really reflects the mood of the songs. We click very well with Micci.”

Single Serving: Osca – Around The Bends