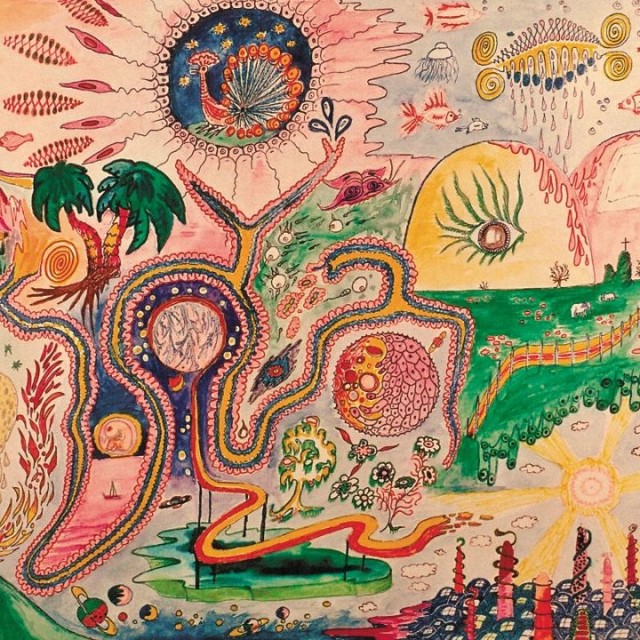 Admittedly, I’ve not been a Youth Lagoon fan for very long. In fact, until recently I’d pretty much (unfairly) written off Trevor Powers’ music. But that’s changed recently. After more or less immediately falling in love with the first single “Dropla” off his new album, I picked up his previous album The Year of Hibernation on a whim. I’d listened to the album before, but that night, when I listened to my new record for the first time, everything just clicked. What had once sounded boring and a little “one note” now sounded warm, intimate and incredibly lovely. We listened to it on repeat that evening. Later that night Kasey went into labor. On our drive to the hospital we talked about how we wished we’d thought to bring the album with us for the drive (and maybe even for listening to in the delivery room). Let’s just say it became a “family favorite” overnight.

Despite a number of similar elements, Wondrous Bughouse is a very different album from The Year Of Hibernation. Nonetheless, it’s also already become very popular in our home. Most obviously, it’s a much bigger album sonically. The Year Of Hibernation is a warmly-embracing, tightly-contained, cohesive package where each song is more or less built from the same elements. It’s gauzy and lo-fi and almost sounds like one composition with separate movements. Meanwhile, Wondrous Bughouse is instrumentally broad, highly textured, and structurally far more free-wheeling. It’s trippy Flaming Lips-style psychedelica built on a more personal, intimate level.

The album’s first big moment comes quick with the second track “Mute.” Powers’ vocals are still wrapped in distortion and the melody is still warbled and unstable, but the percussion is crisp and tight; the sonics are visceral; and the songwriting is much bigger in ambition. Ultimately, it could have almost been the work of a completely different songwriter than the one who’d written The Year of Hibernation. Indeed, “The Bath” is one of the few tracks on Wondrous Bughouse that would sound in place on his debut. It has that same distantly sparkling ambiance and tightly-wound melody that makes Youth Lagoon’s debut so unique and wonderful.

Meanwhile, “Pelican Man” may be the album’s most straight-forward pop-experiment with it’s clattering, cacophonous soundstage coiled around a bright, but filmy piano-framed tune. Yet, the album’s finest moment is the tense and grandiose “Dropla” with it’s orchestral, warmly building energy and Powers’ unusually direct chorus in which he repeatedly chants “you’ll never die, you’ll never die, you’ll never die.” But, even if that is the album’s peak, the rest of the album remains solid and doesn’t disappoint. The off-kilter ballad “Sleep Paralysis” is twinkling and lean. “Raspberry Cane” is elegant and lovely. And sparkling album closer “Daisyphobia” has a mystical, pastoral air that is both haunting and lush. In fact, pretty much every track on Wondrous Bughouse is intricately crafted with enough attention to detail to reward repeated listens.

You can buy Youth Lagoon’s Wondrous Bughouse from Insound. Then head over to our Kitchen to read Kasey’s recipe for Butternut Squash & Tahini Spread.