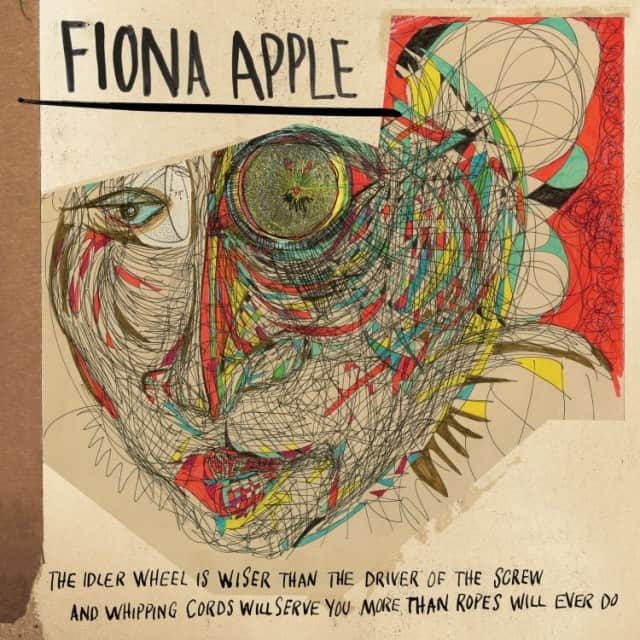 Initially I was convinced I’d never find a good meal to pair Fiona Apple’s latest album with. In some regards, it appears to be not particularly Turntable Kitchen friendly. First of all, the title of her new album, The Idler Wheel Is Wiser Than The Driver Of The Screw And Whipping Cords Will Serve You More Than Ropes Will Ever Do, is far too long to fit within the space we’ve reserved for our headings here at TK. If I tried to write it all out, the text would spill over the date and into the picture when viewed from our homepage. That is a small issue, but it also works for a symbol of how non-pliant this album initially appears to be as a whole.

On first blush, The Idler Wheel (as I’ll refer to it for the remainder of this review) is a really difficult album to suggest as a musical pairing with any recipe. After all, it’s very clearly not intended as background music. In fact, it pretty much demands you pay attention to it. What’s more, there are no traditional singles on the album (the closest cuts would be “Werewolf” and “Periphery”) and very few elements in her current songwriting efforts that could be referred to as a “hook.” Further complicating our pairing is that the track “Regret” involves a pretty unappetizing line about a specific bodily fluid that is repeated over and over again.

And yet, I’d argue that all of those factors that make it a difficult pairing actually make it perfect dining music. After all, the purpose of pairing music with food is to create a memorable experience. My most memorable food and music experiences have rarely involved “easy” music. Nonetheless, to keep the experience balanced The Idler Wheel definitely needs a pairing it can compliment and one that won’t be completely overshadowed by Apple’s aggressive songwriting. With all of that in mind, I think the album actually pairs quite well with Kasey’s recipe for Farro and Cherry Salad with Champagne Vinaigrette.

The recipe, like the album, is a blend of competing elements. The cherries are sweet. The farro is meaty and chewy. The spinach is leafy and green. The champagne vinaigrette is sour and aromatic. These ingredients blend together beautifully for a complex and tasty dish. Apple’s album is similarly complex balancing beauty and vulgarity; crafting sparse instrumentation into complicated arrangements; and collapsing hook-less melodies into catchy compositions.

Indeed, Apple’s fourth full-length album is carefully layered with a blend of both unique and traditional instrumentation: piano, guicharo, auto harp, string harp, teisco guitar, “pillow,” thigh slaps, tympany, drums, bass keyboard, truck stomping, bouzouki, marimba, etc. That list would suggest that the album would be lush and orchestral, yet it’s actually quite sparing in instrumentation. When Apple performs live she is accompanied by a team of very talented musicians. Yet from the very beginning there can be no question that she is the star of the show. And, it’s not just because it’s her name is on the marquee. Her voice easily cuts through everything that surrounds it. She is the star because she commands your attention. And the same can be said of every tune on The Idler Wheel.

That is not to suggest that the instrumentation supporting her is an after thought. To the contrary, every beat, note or background field recording has been meticulously placed. In fact, there can be no question that all unnecessary bits have been thoroughly scrubbed from the recording. And yet many of these somewhat sparse compositions would sound lovely and engaging even if Apple left her talented voice at home. The piano on “Werewolf” is bright and clear. Little flourishes fill in nooks and crannies in the melody. It builds into cascading piano rolls and tense percussion. And all along Apple’s vocals rise and fall effortlessly drifting from sweet and gentle to growling and aggressive. “Periphery” literally shuffles open into a springy piano-led melody feathered out by the sound of feet shuffling rhythmically through gravel. Each of the melodies rely upon little accompaniment. As a result, it’s hardly surprising that the most “crowded” space on the entire album is packed to the gills with little more than Apple’s own voice layered repeatedly upon itself on the closing track “Hot Knife.”

So, yeah, despite it’s initial appearance it’s my opinion that The Idler Wheel is actually “anytime” music. At least for anytime you want to listen to a beautiful and memorable album featuring masterly compositions and amazing vocal performances. If you hadn’t heard it yet, The Idler Wheel is a pretty damn good album.

You can order The Idler Wheel… from Insound. Then head back to the Kitchen to read Kasey’s recipe for Farro and Cherry Salad with Champagne Vinaigrette.