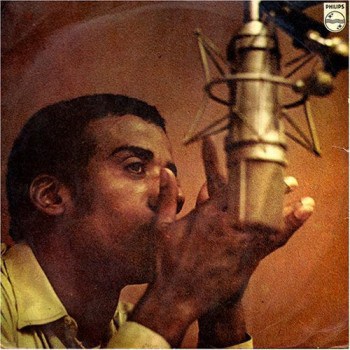 I know it is beyond merely cliche to say so, but music truly is a universal language. And it is a good thing too because if I’m being honest, and I’m embarrassed to admit it, but my knowledge of languages beyond my own is dismal. Thanks to two semesters of evening courses at a local community college I speak a useless phrase or two in Russian; and thanks to three semesters in high school, my Spanish is sufficient to just barely get me around some (but not all) Spanish speaking countries and stumble clumsily through a Pablo Neruda poem (who, despite my abject language skills, is nonetheless my favorite poet). Nonetheless, I have no trouble relating to a good song sung in a foreign language. French, Swahili, Spanish, Portuguese, English… it is all the same to me so long as I like the melody and the mood it sets. In fact, for me, falling in love with a song sung in a foreign tongue is a deliciously unique experience. I can first soak in the rhythms, melodies, intonations, ambiance and and production of an album – completely naive to the meaning of the song’s lyrics. Later, when I finally seek a translation of the lyrics it can be like rediscovering the song all over again. This has all been true for me as I’ve discovered Jorge Ben’s (he now goes by Jorge Benjor) 1970 release Força Bruta.

Of course, this is an easy record to love. Even ignoring the lyrics entirely, there is a lot of great stuff going on here. Instrumentally it is a pleasantly smooth blend of samba, 70’s soul, jazz, pop and funk – relying heavily on warm and simple acoustic grooves and Ben’s soothing and gentle vocals. It has a buoyantly mellow, organic, late-Summer warmth that makes this album a perfect pairing for Kasey’s Fig, Mint and Honey Galette. Both the recipe and the album are unique without being alienating: scratching that itch for something a little different from the same old same old.

And, yeah, the language never gets in the way. Instead, this fantastically soulful album proves to be more than enough musically to bridge the language barrier. Besides, if you’re obsessive like me, you may find that you love the album enough to hunt out translations of the lyrics and happily discover that “Oba, La Vem Ela” is a sweet tune about adoringly watching a love interest from a distance (“She has a scent of a flower that I do not know the name of, but it should have a pretty name like her”); that “Muhler Brasileira” is a love song dedicated to all Brazilian women; or even be surprised that, to a certain degree, the lyrics to the flower-loving track “Pulo, Pulo” nicely coincide with Kasey’s story today about braving the heights of the ropes course on a recent weekend getaway at a friend’s summer camp wedding: (“Hop, Hop, Hop. Do not fall!”).

Head back to the Kitchen to read the recipe for Kasey’s Fig, Mint and Honey Galette. Believe it or not, you can find this on vinyl at Insound. 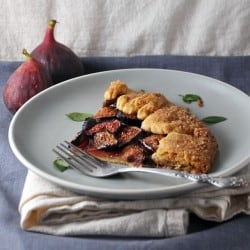